Justin Chon is a Korean-American actor and director who made one of my favorite films of the year of its release, that of Gook (2017). It was a powerful statement about the 1992 Los Angeles riots and the interracial tension of that time. Based on that one film, I was curious to see what Chon would do next. This is his follow-up to that incredible film. Gook was a black-and-white, historical drama with a lot of dialogue. This film is a color contemporary with not that much verbal text. It's mostly just shots of his protagonist looking wistfully or blankfully into whatever space is around her. This film is less an external exploration as Gook was. It's more of an internal interrogation, one that's all about the internal thoughts and emotions of the main character, as she struggles with her situation.

Tiffany Chu, in her feature debut, stars as Kasie, a young woman who lives in Los Angeles. She lives with her father in some cheap bungalow. She has a brother, but he's not present in the beginning. Her mother is also nowhere to be found. It's revealed later that her mother doesn't want anything to do with Kasie and her brother. Kasie wanted to be a musician, possibly a pianist, but she didn't go to school or college for it because her father became ill. She's now struggling financially because she has to pay his medical bills or his medical care. She earns extra money by working at a Koreatown, karaoke bar as a hostess. 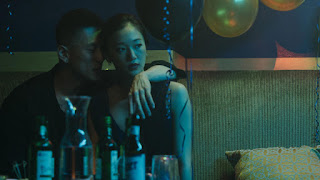 If you know nothing about Koreatown's karaoke bars, this film could function as a kind of exposé into those places. Some might think of it as a literal karaoke bar where people go to sing along with songs. There is probably that kind of singing at those Koreatown places, but it seems to function more like a brothel or strip club, except women don't dance or strip naked. The women are strictly escorts or companions for the men who attend. The women sit and drink with them, talk and laugh with them, mostly as arm candy. However, the women usually line up to be chosen and if they're chosen, then they get paid. The film suggests that women have to do more and the place is essentially a sex club for the wealthy Asian guys who frequent them. 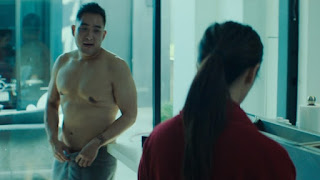 This film doesn't go as far as one might hope, if it were really an exposé. It seems to be critical of the men who attend and doesn't portray them in the best light ultimately. The film doesn't condemn all the men who go there. It doesn't give us as good a look into these karaoke bars as Hustlers (2019) did of New York strip clubs. We simply learn that the women who go there to be escorts are called "doumi" or "domi" girls. The way men refer to them makes doumi girls seem like not much better than whores. At one point, Kasie is involved with a man from the karaoke bar named Tony, played by Ronnie Kim. He's set up to be the Asian Richard Gere from Pretty Woman (1990), but this film would be the anti-version of that. 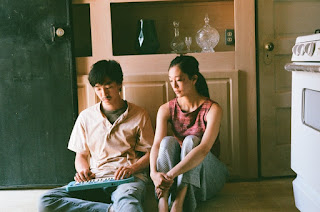 Instead, we're dropped into a family drama between a sister and brother, dealing with their ailing father. Unfortunately, the film doesn't really work from that perspective. First off, we're not even sure what illness or ailment the father has. All we see is that he's lying comatose in a bed in Kasie's house. We're told that he's going to die soon and he should be put into a hospice. It's never clarified if he is actually comatose because there is a strange moment when the father seemingly wakes up.

Teddy Lee co-stars as Carey, the younger brother to Kasie. He's estranged from his father and sister. Kasie calls him to come help when she loses the in-home nurse who was caring for their father. It's with Carey that he experiences the father waking up. It could have been a hallucination or something, but it's the only time that something like that happens, so it's not clear what to make of it. Flashbacks reveals that Carey took his mother's abandonment hard and he fought with his father, nearly coming to physical blows, but the film doesn't really go beyond the superficial in Carey's relationship with his parents. 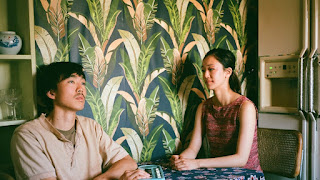 Another thing to note is the possible meaning of the title. At one point, Tony buys Kasie a purple dress. It's a special, Korean dress called "hanbok." I'm not sure what the greater point that Chon is making with the use of the dress. It's a traditional form of clothing. It could be seen as a symbol of her past and her being possessed by Tony. She meets a Latino guy named Octavio who takes her to a Quinceañera. The way the ending goes, it could represent her breaking away from her customs and cultural traditions that were holding her down and flying to something new. Yet, the film also feels like it's more about her connecting to her brother, which Chon lands in a visual sense using the juxtaposition of Kasie and Carey lying together with that of two palm trees. It's just that Chon doesn't land it emotionally all that well.

Not Rated but contains language and sexual situations.
Running Time: 1 hr. and 27 mins.