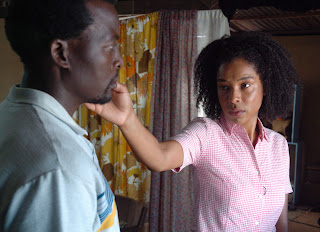 This is the true story of Sandra Laing, a woman who was born and grew up during Apartheid in South Africa. In the Behind-the-Scenes featurette on the DVD, British filmmaker Anthony Fabian says that even though it's a very specific story about a very unusual case, the movie's message of "how do we treat people who are different from ourselves" is one that can transcend and be applied to any country, including the United States.
What makes this story very specific and this case very unusual is the fact that Sandra Laing's skin color is brown and her hair is that of a Negro's, yet her parents are Afrikaners. It's strange but true. A white couple actually gave birth to a black child. At first, people think that the white mother cheated on her husband with a black man. This was before DNA tests could easily prove paternity, but that isn't a question here. These two white people really are the biological parents of this little Negro child.
Once that is established, the issue becomes what do they do with this adorable, little black girl. Besides being a medical mystery, there are sociopolitical implications. This is after all 1960s South Africa, and during this time Apartheid was the law of the land. Apartheid is legal segregation of whites from nonwhites. It's tantamount to the Jim Crow laws in the American south during that same time.
Like with Jim Crow, blacks in South Africa were basically treated like lesser human beings. Instead of the N word, blacks in South Africa were called "kaffirs," and those called such were in fact treated like animals. One black character even comments that they were treated like cows.
In order to protect her from that, in order to ensure that their daughter wouldn't be treated like a cow or a kaffir, her parents implore the government to declare Sandra or Sandy a white girl, despite clearly looking like a black girl. Because of the nature of the situation and the behavior of the parents, this becomes both a good thing and a bad thing.
The film begins when Sandy is a young girl, dealing with being the only black girl in a predominantly white-controlled society. Eventually, the film jumps forward to Sandy as a woman, played by British actress Sophie Okonedo (Dirty Pretty Things and Hotel Rwanda). Okonedo plays Sandy as very soft-spoken, as passive, well-behaved and dignified.
One telling scene for her character is when Sandy goes on a date with a white man. They go to an all-white diner where people become obviously disturbed at Sandy's presence. Instead of staying and defying people's racism, she sneaks out. This is not to suggest that Sandy is a coward or weak. She's strong in her own ways and in many ways, and appropriately she gets stronger as the movie progresses. From the time that Sandy starts dating, she hits one hardship or difficulty after another, and the strength that Okonedo displays within Sandy is striking. It's amazing because it's unwavering and it does build.
The first great turning point is Sandy's strength finally being used to go against her parents. Thanks to the emotionally layered performances of Sam Neil and Alice Krige, we see that her white parents love their black child. Yet, since she was little, they wanted her to be white and even actively tried to make her white, using makeup and whatnot. This cuts two ways. They want her to have access to the better things that South Africa affords to whites. On one hand, they push her whiteness on a practical level but, as we subtly realize, they do so because they also believe that being white is better. Despite giving birth to a black child, her parents are racists to a degree.
The plight of the people in Swaziland and neighboring provinces are depicted with great empathy and insight. Precious: Based on the Novel 'Push' By Sapphire (2009) drew a lot of comparisons as a modern version, but Skin is also a kind of new take on The Color Purple, but centering on a young black woman stuck between two worlds, not finding a home among the whites or the blacks.
Five Stars out of Five.
Rated PG-13 for themes, some violence and sexualiy.
Running Time: 1 hr. and 47 mins.