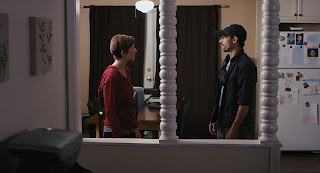 Christopher J. Hansen is a film professor at Baylor University in Waco, Texas. He has now written and directed at least four features. He is sometimes credited as Chris Hansen. He is not to be confused with Christopher E. Hansen, one of the hosts of Dateline NBC and its series To Catch a Predator. Unfortunately, that confusion exists on Rotten Tomatoes for Hansen's previous film Where We Started. The link for "Directed By" is wrong, as of February 20, 2018, which is a shame because Where We Started is a great, little movie that should get proper credit.

This is Hansen's follow-up to that film utilizing the same two actors from Where We Started who happen to be married to each other in real-life. Here, they are not. While I compared Hansen's last film to Before Sunrise (1995) or Before Sunset (2004), the Oscar-nominated film by Richard Linklater, this film is one I would compare to Three Billboards Outside Ebbing, Missouri (2017), which is up for seven Oscars. In a lot of ways, this movie is better than that Martin McDonagh prize-winner but also in similar ways, this movie is problematic.

Cora Vander Broek stars as Jill Temple, a mother whose 5 or 6-year-old son has gone missing. We meet her two years after the fact and in many ways, she is like Frances McDormand's character, Mildred, in Three Billboards Outside Ebbing, Missouri. There is a fire to her, an anger or rage that lashes out at any and possibly everyone. There are no flashbacks, so it's not clear if Jill was always feisty, but if not, since losing her son, she has become feisty and a bit incessant and abrasive. She's not as abrasive and quite frankly as abusive as Mildred, but there are glimpses of Mildred in Jill. 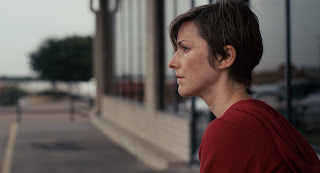 One possible reason that Jill isn't as abrasive is probably because unlike Mildred, Jill doesn't know if her child is dead or alive. Mildred's anger is fueled by her knowledge that her child was brutally murdered. Jill simply doesn't know what happened, so she has a sense of hope that maybe her son, Holden, might return alive. There is an interesting question in the film of whether that hope is a good thing in this situation or if it's really just a state of denial of the reality that her son is most likely dead and whose body will probably never be found. The movie pivots away from that idea of hope to that of self-blame and the depths and the degrees that self-blame can take. The idea of hope instead is rather lost.

Initially, Jill pesters the local police much like Mildred does. Her son was lost at a park near some woods where she jogs. She finds potential suspects and brings them to the police, which is vastly more active and an even more productive thing to do than anything that Mildred does. Mildred simply puts up billboards to shame the police, which is ultimately a passive thing on her part as she just sits around waiting for answers. Jill is actually more engaged. Instead of billboards, Jill actually puts up posters of her son all around trying to get answers.

Hansen and his writer, Brian Elliott, have to be given credit for creating such a fixed and fixated person who is still none-the-wise active. However, Hansen like McDonagh trips up with the introduction of a certain male character or two. First, I'm not sure why the character who is the foil essentially had to be a man and I'm not one who normally embraces a term like "mansplaining," the portmanteau of "man-explaining," but when all the other female characters are so dismissed or dismissive as the women at Jill's support group are, I unfortunately start to think that, despite whatever Hansen's intentions were. It also doesn't help that both men in this movie are either patronizing or literally preaching to Jill constantly. 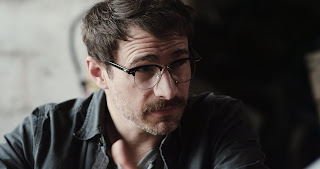 Matthew Brumlow co-stars as Burton Rose, a man whom Jill meets at the local laundromat after her clothes dryer breaks down. She catches him secretly videotaping her and other people at the laundromat. Now, keeping the comparison going, he's like Sam Rockwell's character, Dixon, in Three Billboards Outside Ebbing, Missouri. Burton isn't a racist like Dixon, but he is problematic in similar ways. Simply put, if Dixon is an ignorant jerk, then Burton is a patronizing jerk.

His jerk ways manifest in his fancying himself a kind of vigilante. His vigilantism takes the form of video spying and shaming. His first act is to create a video about Jill's son without discussing it with her first, which is a total jerk move, regardless of whether his intentions were good. He uses his phone to spy on her in the most egregious and creepy way and doesn't apologize for it. He actually spies on her at night while she's lying in bed. This is not only a jerk move. It's a disgusting one, especially in the wake of the #MeToo Movement. No, there isn't anything overtly sexual about his actions, but it's way too close for comfort.

In a flashback, it's revealed that Burton had told his wife that he was leaving her in a cold and calculated way. This results in his wife attempting suicide but rigged in a fashion that he would cause it. Unfortunately, the movie never reveals why he was leaving her. The movie never delves into what went wrong in his marriage after 5 years or what his motive was for leaving. Since her suicide attempt, he has changed his mind and remains tied to her, but, for all we know, he was leaving her because she cheated on him with someone else, which would make his devotion to her now nonsensical. Yes, he's acting out of guilt, but he could be paying a penance that he possibly shouldn't be. We don't know.

Yes, he's a foil that's supposed to mirror Jill who's acting out of guilt too, but Jill's guilt logically follows from a similar act of her leaving but her reasons for leaving are explained. Burton's reasons for leaving never are, which ultimately makes him a hollow character. His vigilantism doesn't even make sense. He attempts to shame a man who beats his girlfriend, but he does so in a very asinine way, which probably wouldn't end the abuser's violent actions. Burton should have instead gone to the police being that he had evidence of the abuse. His attempt to shame the abuser is done in a way to shock or impress Jill than actually make a difference, which we never learn if it did or not any way. 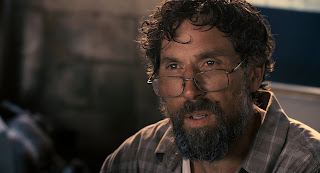 Ryan Artzberger also co-stars as Earl Ambrose, the creepiest of all the creeps here. He works at a salvage yard, but he has no problem breaking and entering, as well as invading a woman's privacy. Yes, he repeatedly breaks into Jill's house and does whatever he likes. Regardless of his intentions, the idea that he would invade a woman's space without permission isn't endearing, even though Hansen's movie tries to play it off as a joke or just something quirky he does. It's not quirky. It's creepy, and again more creepy in the wake of #MeToo that a man can just invade a woman's home or private space without her express permission and do whatever he wants. It goes beyond knowing boundaries.

Earl is also the one most guilty of mansplaining. Several critics were bothered at a scene in Molly's Game (2017) where Molly's father sat her down and forced a "come to Jesus" moment, but at least it was Molly's father, a man who raised her and who intimately knew her. Here, Earl is a veritable stranger who just pushes his way into Jill's house and basically tells her what to think. I suppose it's meant to match her aggressiveness from earlier, but it comes across as an invasive form of proselytizing like a Mormon missionary or Jehovah's Witness deciding to pick the lock on your door, come in, manhandle you into a shower and keep you hostage, while they recite religious babble into your ear.

Earl is revealed to be a former priest, but like Burton, he never explains exactly why he left the church. For all we know, he could have been kicked out for molesting boys. I'm not exactly sure if he's Catholic, but when I see a former priest, that's where my mind goes, thanks to things like Spotlight (2015) or even Three Billboards in which there's a diatribe from Mildred about the church abuse scandal. I'm not saying his character couldn't have been a man, but it would have been preferable if Earl were a female character and not so breaking-and-entering.

Not Rated but for mature audiences.
Running Time: 1 hr. and 32 mins. 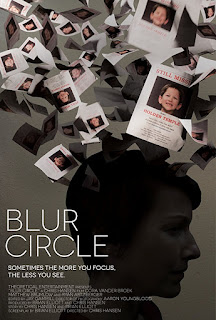