TV Review - Lights Out: Season One 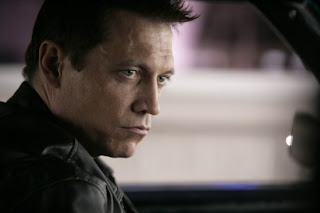 Holt McCallany starred as Patrick Leary, a former heavyweight champion in boxing. His nickname in the ring was Lights. Years ago, Lights stepped away from the sport for family reasons, actually his wife, Theresa, played by Catherine McCormack, pressured him to step away. When Lights' younger brother, Johnny, played by Pablo Schreider, tells him that Lights has no more money due to some deals that went bad, and now has a looming debt, Lights' alternative is to go back into boxing.
His brother, Johnny, sets up a fight against Death Row Reynolds, played by Billy Brown. Reynolds is younger, more muscular and a current fighter whereas Lights hasn't fought in five years. Lights is older. He's 40 and not as in shape. He's like Rocky Balboa in the last movie. What makes matters worse is he's in danger of suffering pugilistic dementia. It's a brain-damage condition as a result of boxing.
Lights hides the dementia danger from his wife, Theresa, but his daughter, his youngest daughter, finds out and pressures him not to get back into the ring. Unfortunately, he's also under pressure from a shady boxing promoter named Barry, played by Reg E. Cathey.
Lights' father, played by Stacy Keach, trains his son in the gym that Lights owns. Lights doesn't think it's enough so he hires Ed Romeo, played by Eamon Walker, as his trainer. It's at this point that this well-written and well-acted drama gets even better. The relationship between Lights and Romeo is interesting because it's tough love that evolves into something deeper. Romeo even moves into Lights' house forces him into a night schedule and divides him from his father and brother.
This series came in the wake of the Oscar-winning film The Fighter. Because of which, I wasn't in the mood for a boxing series, but this is such a superb, personal tale about a man trying to provide for his family and having boxing as his only outlet. In a lot of ways, it's more similar to Russell Crowe's performance in Cinderella Man. Created by Justin Zackham, the writer of The Bucket List, this series added a bit more of a danger element, not only the health danger but also danger from the criminal and political element into which Lights gets pulled.
This series succeeded for me because McCallany is so great in this role. It has been remarked by others that McCallany has a great face. He looks the part so completely and his performance is often heart-breaking. The man can throw a punch, but he knows how to hit emotionally just as well.
Unfortunately, the FX network cancelled the series after only one season. It's bittersweet because I'm sad that a great show like this won't continue, but this series was as close to perfect as you can get in this serialized-resistant TV landscape. I would have loved to see where the show could have gone, but where it could have gone could have been down. At least now, it can remain a near perfect short series, which can be enjoyed on DVD.
Five Stars out of Five.
Rated TV-MA for language and violence.
Running Time: 1 hr.