Tyson Anthony is an author who wrote the novel on which this web series is based. The series premiered in March 2016 on Vimeo. It focuses on a 18-year-old, poor black kid named Damien in the 1990's who falls in love with his brother's best friend named Vincent. Vincent is in college and Damien lives with his widowed father. The whole thing is set in the summer before Damien himself goes to college. The series was 13 episodes through which Damien discovered and dealt with his homosexuality and how various other people handle it. It also is about Damien's first heartbreak. All the episodes were directed by Henderson Maddox and distributed through Maddox's company Signal 23 TV.

The first 12 episodes were between 14 and 24 minutes long. Because the series was so successful, the 13th episode was nearly two hours long and screened in theaters or in venues across the country. A second season was obviously going to happen. However, there seems to be some dissension in the ranks. Namely, Tyson Anthony is no longer working with Henderson Maddox. There has been a parting of the ways, which may or may not have been amicable, but whatever the reason, it has resulted in there being a double Season 2 of this series. The first Season 2 is called Freshman Year, and the second Season 2 is called The Revolution.

Freshman Year is the Season 2 that continues the story line with Damien as he goes to North Carolina Tech to major in computer science following his wildest summer where he not only fell in love with his brother's best friend but he also hooked up with three other guys, including his play-cousin Kendall. Due to financial difficulties, Damien is forced to live off campus with Kendall and Kendall's mom, Aunt Monica. We see Damien encounter two older college students who both stir up trouble. One is a bully and a manipulator named Shane and the other is a closeted football player named Max. We also see Kendall rekindle a relationship he had prior to that summer with a church boy named Tristan.

The Revolution is the Season 2 that begins a brand new story line but that's also entirely set during college. Instead of the 90's, this series takes place in the 1980's during the height of the HIV/AIDS epidemic. The protagonist, Dustin, is a sophomore at Monroe College. Dustin had an abusive, homophobic father who beat him when he found out his son was gay and now Dustin is dealing with a fellow college student who has also been gay-bashed. We follow Dustin in class as well as his involvement with a political group that wants to protest and fight back.

Tyson Anthony wrote Freshman Year. Being that he's the original author, it makes sense that Freshman Year has the original characters or access to the characters from the first season. However, Anthony's Season 2 is directed by Anthony Bawn, another black gay filmmaker, and despite the writer being the same, this season does feel different, thanks to Bawn. A lot is similar but there are tonal changes that are noticeable. 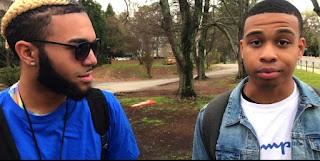 Bawn's version, for example, loses most of the voice-over narration that was a staple of the first season. All the narration came from Damien, played by Brandon Karson, but instead of narration, Damien talks directly to the camera like in House of Cards. House of Cards though has more room to incorporate those direct asides. Here, the asides are too much and feel clunky. It takes Damien literally out of the moment, making Damien less a character and more like one of those robots in Mystery Science Theater 3000. It would be one thing if the asides weren't so on-the-nose and maybe a little funnier, but they're not.

Despite the season taking place at college, Bawn never depicts any classroom scenes, at least not in the first seven episodes. The majority of Damien's story here is him trying to focus on his studies and schoolwork, but yet he keeps getting distracted. Apparently, his main issue arises when he refuses to receive anal sex from Shane who has pretty cool blonde hair for a black man. Last season, Damien seemed inclined to do every other kind of sex act, but for him to draw the line here needed more explication. There's even one moment when Damien asks Shane if he has a condom. Shane says no, which causes Damien to punch him, but it begs the question if Damien himself had any condoms for all their previous sexual encounters, and if so, why couldn't he just get one in that moment?

The best part of the season is the relationship between Kendall, played by Rahim Brazil (pictured on the right), and Tristan, played by Desmond Fletcher. It's interesting because both are in the closet, but Kendall is honest to his mother, Monica, played by Mimi Fletcher. She's the only motherly figure in the season. There was only one motherly figure last season, but the way Monica is played here is way more refreshing. She's not hateful but more fearful. Rahim Brazil and Desmond Fletcher have great chemistry and both make a cute couple. Their characters met in church. Kendall likes preaching and Tristan likes playing music for the choir, so their relationship is more than just sex, which is the opposite of all of Damien's relationships.

Maddox seems to be the sole writer and director of The Revolution. This Season 2 doesn't have the original characters, but it does have a couple of the original actors. Brandon Karson who's in Freshman Year was the protagonist and the main, original actor in Season 1. He doesn't appear in The Revolution, at least not as a physical presence. Karson instead provides all the voice-over narration. A lot of what Maddox does works, but Karson's narration is too jarring. It shouldn't be there. 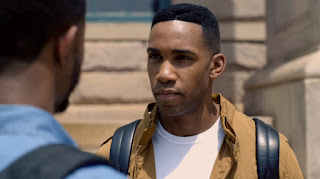 Gary Lavard was in Season 1 too as Damien's love interest and the brother's best friend, Vincent. Here, Lavard plays Dustin, a film major and a sophomore at Monroe College in the 1980's who was gay-bashed by his father as a boy and is now dealing with a gay-bashing on the college campus. Lavard proved in Season 1 that he has great range as an actor. There is a bathtub scene that was particularly effective, but, despite both Vincent and Dustin being black and gay, Lavard makes you believe that they really are two different people. Lavard really creates a different character here. HIs voice and body language are all distinct and separate from what he was in Season 1. 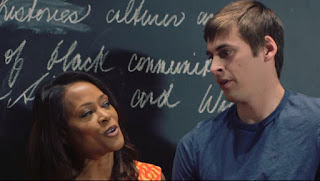 Maddox succeeds over Bawn in that Maddox actually does depict a classroom. He even fills it with a great supporting cast, led by the amazing Robin Givens (Boomerang and Riverdale) who plays Dr. Henderson, a black history professor who is funny, charming and engaging. She is certainly a bright spot in this series. A highlight includes the moment when she gets a white student to yell, "I'm black and I'm proud." 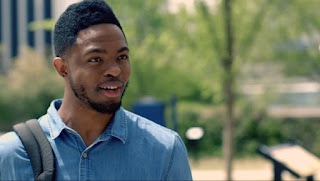 Maddox does something here that is pretty bold. Dustin meets a political group called the Monroe 5, an all-gay male group seeking justice against the gay-bashing, which they call a hate crime, but what Maddox does is name each member of the Monroe 5 after a well-known, black person in the Civil Rights Movement. The leader of the Monroe 5 is Martin, played by Jaquay Wilkerson. He's named after Martin Luther King, Jr., and Martin argues for nonviolent resistance just like the real-life, civil rights leader. The poli-sci major of the Monroe 5 is Malcolm, played by Levi Erik. He's white but he's named after Malcolm X and argues for resistance by any means necessary. 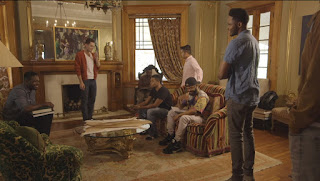 The series also satisfies a fantasy I didn't know I had. It satisfies the fantasy of imagining Martin and Malcolm as lovers. Yes, Martin and Malcolm have sex in a crazy and practically pornographic scene. It was the first and one of the most intense sex scenes Maddox has done. 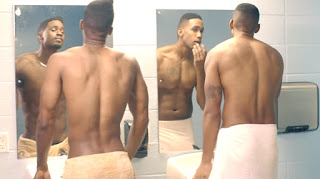 As he did last season, Maddox incorporates archival footage from the 80's in order to build proper context. Even though last season included a mom pulling a gun on her own son, Maddox is still able to raise the stakes for this season, as he better explores issues of identity and sexuality. It might seem at times a little didactic. The cinematography in Maddox's series is better than in Bawn's series. Maddox's editing misses the mark occasionally and the makeup feels off, but emotionally Maddox's series is spot on.

Tyson Anthony is the one who originated this whole thing. Freshman Year picks up the ball from what was a great first season, but Anthony and his director Anthony Bawn don't carry it very far. This is opposed to Henderson Maddox who picks up the ball and really runs with it. I'm not sure what caused Maddox to take the same approach as Ryan Murphy's American Horror Story where each new season is a new story with new characters, but creatively it was the best thing to happen to him.

Not Rated but contains violence and intense sexuality.

About Him: Freshman Year
Available on BawnTV.com.

About Him: The Revolution
Available on Signal 23 TV via Vimeo.