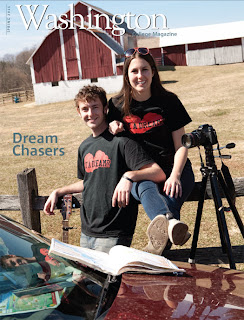 The 15th Rehoboth Beach Independent Film Festival or RBIFF has a Regional Showcase that features 10 movies made by Delmarva filmmakers. The majority of which are documentaries that are about a hour in length. The first is a road trip movie called The Dream Share Project by Chip Hiden and Alexis Irvin. I talked to Hiden by phone about the making of this project, what he got out of it and what he hopes others get out of it as well.

Hiden and Irvin are boyfriend and girlfriend. Hiden is a history major from Washington College and Irvin has a journalism degree from the University of Maryland. Both are 25 now, but, a year after graduation in 2009, both had office jobs but didn't like the work they were doing or it wasn't as fulfilling as they would want. They decided to plan a 3-month road trip to various cities and talk to various people who unlike themselves actually did like their jobs.

Neither studied film or filmmaking. They were basically self-taught. They bought a HD flip camera and hit the highway. The trip lasted from August to November 2010. It wasn't first-class tickets and four-star hotels. It was camping and eating out of cans. Yet, they filmed over 30 interviews with artists, activists, athletes and all others, which took them as far as west as Hollywood, California, where some eyebrows were raised at Hiden and Irvin's scruffy, ragtag video production.

By the end, they did come back with 50 hours of footage and started the process of editing it down to what will be shown at RBIFF. After launching a Kickstarter campaign to raise the necessary funds to finish the editing, Hiden and Irvin completed the movie in the fall of 2011 and started screening the project at colleges and universities. The first was the University of Maryland. The couple continues to screen at schools, specifically because their goal or mission is to empower young people to chase their dreams.

What started as a lark to encourage themselves out of their boring office jobs evolved. Hiden revealed that he never really believed that this trip would turn out as well as it did. He made a lot of planning before setting off, but often he and Irvin were flying blindly. As such, many of the interviews came to them by random chance or divine providence. Hiden just bumped into or happened to run into famous basketball players, comedians and fashion designers, many of whom by sheer coincidence. Yet, more chance encounters with notable people kept occurring in places like Park City and Austin, and all of them kept yielding great moments of eye-opening advice and anecdotal wisdom that Hiden said gave him goosebumps.

When organizing all these moments of goosebumps, Hiden said he extrapolated lessons that he structured under five stages. The first stage is understanding the need for dreams and goals. The second is knowing how to find those dreams or passions. The third is committing. The fourth is overcoming challenges. The fifth is defining success and defining it in a way other than earning a lot of money.

Earning a lot of money certainly isn't how Hiden defines his success. Defining success might not even come in the most traditional avenues. This is mirrored in one of Hiden's favorite interviews. Kyle Berner was a guy who worked tech support for Dell computers who went into the business of making flip-flop shoes. It's not the most obvious career path, but it's a man seizing upon an opportunity after following a whim, which is essentially what Hiden and Irvin did. They followed a whim, but their argument isn't for people to just be capricious. Their argument is for people to love what they do and if they don't, move until they are.