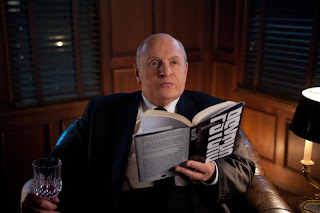 This movie tells the behind-the-scenes steps that acclaimed film director Alfred Hitchcock at age 60 took in order to make Psycho (1960). Hitchcock is one of my all-time favorite filmmakers, if not my absolute favorite, and as a cinephile or film geek, I knew a lot of these behind-the-scenes stuff already, but even if I didn't, I would still feel that this movie is boring.

Oscar-winner Anthony Hopkins (The Silence of the Lambs) stars as Alfred Hitchcock who the press thinks is too old and who the studios think should only do more movies like North By Northwest (1959). Yet, Hitchcock wants to do something different like a smart, horror film. He reads in the newspaper about Ed Gein and is inspired to do a movie based on Gein's crimes.

Oscar-winner Helen Mirren (The Queen) co-stars as Alma, the wife of Hitchcock, but she just isn't the woman to whom Hitchcock comes home and makes him dinner and cleans the house. Alma is his partner in the film business as well. Because the studios won't give him the money, Hitchcock has to self-finance Psycho, which puts a strain on Alma. She not only has to manage the home economics but she also has to help him write the screenplay, manage the set and supervise the post-production.

Yes, there's some tension along the way. Hitchcock has to struggle a little bit to get this movie made, which underscores how Hollywood worked fifty years ago and how it still works today. Despite Hitchcock having the success that he had, he still had trouble in Hollywood. There was a bitterness between Hitchcock and one of his actresses, but, beyond that the steps, and not just 39, but the process of putting Psycho together felt by rote. It almost didn't matter that he was making this film.

A lot of stuff is skimmed over. Hitchcock meets the two famous actors who star in Psycho. He meets Anthony Perkins, played by James D'Arcy (Cloud Atlas and W.E.). Hitchcock also meets Janet Leigh, played by Scarlett Johansson (Lost in Translation and Vicky Cristina Barcelona). There are more scenes with Johansson than D'Arcy. D'Arcy gets only one memorable scene and it's brief. The rest of the time he's in the background. It's a total waste of the possibility and potential of having Perkins as a character.

With Leigh, the movie attempts to get at Hitchcock's relationship with women, but it's not enough. She gets a couple of good lines, but, at the end, I didn't care about her at all.

There's a subplot involving Hitchcock thinking that Alma is having an affair. This was interesting and it led to a great acting moment for Mirren, which I think justifies some award consideration that she got from BAFTA, the Golden Globes and SAG. Yet, it feels like a subplot, but when the subplot shines brighter than the main plot than there's a problem. The whole thing was lame.

There's also a lot of build-up over the infamous shower scene in Psycho. What they do with it here was a bit ridiculous. It's one think to have Hitchcock delight in the audience's reaction to it, but to have him fantasize about killing someone himself in that moment seemed odd.