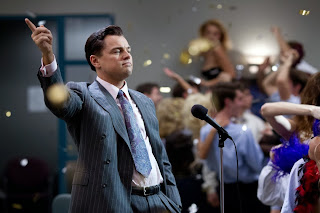 What this film has in common with House of Lies and House of Cards is that it has a manipulative, main character who on occasion speaks directly to the camera. It's done mainly as comic asides. It's also done to include the audience in the wheeling and dealings of the protagonist and to make the audience complicit to his crimes, which is not that difficult to do, given the use of comedy here.

We watch as Leonardo DiCaprio as Jordan Belfort, a stock broker and this generation's Gordon Gekko, start with nothing but a degree and the tutelage of a greedy, drug addicted, masturbatory miscreant and build an empire that embraces all of that miscreant's ideals. Belfort starts trading penny-stocks because of the large commission. He calls people and gets them to invest. These penny stocks are not blue chips, so they're not good or safe companies, or are they?

Belfort will talk straight to the camera, presumably to give detailed explanations of what he's doing and how, but he'll immediately tell the audience to ignore any possible explanation and just accept that he's making money. When the time comes for Belfort to be investigated by the FBI, I'm not sure there was a proper breakdown of what laws Belfort was breaking.

Inbetween Belfort building his company, committing adultery, fending off the FBI, hiding his fortune in a Swiss bank account with the help of a Swiss banker, played by the ever handsome Jean Dujardin, and battling with some members of his inner circle, the movie is simply scene after scene of DiCaprio and often his co-star Jonah Hill riffing on the situation, saying and doing ridiculously funny things. Throw in Rob Reiner who plays "Mad Max," Belfort's father and the guy overseeing the books, and you have the makings of comedy gold, and I must say every actor delivers.

Yet, one expects comedy from Jonah Hill and Rob Reiner, you don't expect it from Leonardo DiCaprio. This is now the fifth time that DiCaprio has worked with Scorsese. While there have been some laughable moments in their previous works, never has Scorsese demanded from DiCaprio a full-on comedic performance. Outside of Scorsese, DiCaprio has had to be comedic, most recently in Baz Luhrman's The Great Gatsby, but Scorsese has him way more over-the-top, going for the big laughs, which he achieves.

Luhrman's direction didn't aid much in the comedy. It rested more on his actor's shoulders. Yes, Luhrman had his flourishes but they were more to sell the romance than the humor. However, Scorsese's direction does aid in the comedy. Whether it's through where he places the camera, his use of slow-motion, his editing and whether it was in the script or not, his application of a Popeye the Sailor cartoon was clever.

The final hour of this film veers into Revolutionary Road territory and the eventual fall of Belfort. Yet, despite the cards being stacked against him, he never gives up. He never takes no for an answer. By the end, we're left with the same message as Oliver Stone's opus, "greed is good,' and even when he loses it all, Belfort doesn't change. He merely starts over.

Five Stars out of Five.
Rated R for strong sexual content, graphic nudity, drug use and language, and for some violence.
Running Time: 2 hrs. and 59 mins.