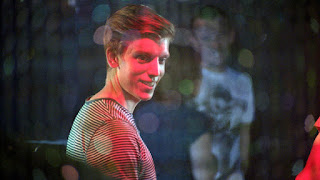 Set in the Church and Wellesley area of Toronto, which is the predominantly-gay area of the Canadian city, the focus is on a young journalist writing about an aspect of the homosexual night-life, as he obsesses slightly over a male model whom he tries but can't seem to find.

Writer-director Eric Henry basically crafts two, fairly-decent, dramatic acts but doesn't really craft a third, which most movies have as a way to wrap things up. This movie wraps things up but without resolving quite a few things. Henry reveals a secret or something that was happened that you didn't realize or was obscured through odd editing choices, and he seems to think that's enough for a third act or conclusion. Yet, it's not enough.

Adrian Shepherd-Gawinski stars as Evan Brisby, a journalist at Xus magazine, a small, seemingly LGBT-centered publication in Toronto. He wants to be a writer for the Gazette, the biggest newspaper in town. He decides to freelance in the meantime. He pitches a story on the gay night-life and in the process of writing this piece, he meets a very good-looking, male model named Jordan, played by Matthew Ludwinski, with whom he becomes very smitten.

Ryan Fisher co-stars as Hunter, a party host who becomes the main interview for Evan's story. Hunter owns a company called On the Hunt, and it's a company that organizes and promotes parties or night-time events within and without the gay community. Hunter went from handing out flyers on the street to managing huge money-making soirees and more.

Henry's screenplay is mainly Evan interviewing Hunter about either what he does or the people who attend his events or are involved in the gay community. These moments are interesting. Other than the interviews with Hunter, the other interviews don't connect much to the piece. He talks to two guys who are into gear fetish. He also talks to a middle-age couple, one of whom is a cross-dresser.

They add color to the movie, but I never really understand why Evan is talking to them. His main story is on Hunter and the parties, so I don't get what the point is interviewing gear fetish guys and a cross-dresser. I would have preferred more in-depth stuff with Hunter where more is learned and the relationship between Evan and Hunter were better developed.

A secret is revealed and it's supposed to change the dynamic between Evan and Hunter, but, because the filmmaker doesn't better develop the two, the reveal is baffling and ultimately tepid. Mostly, Henry doesn't do anything with it. He drops a twist in the plot and doesn't really pursue it or dive further into it.

If Henry had a third act, a proper one or a more, fleshed-out one, then he could have or would have, but instead, Henry abandons what should have been more depth between Evan and Hunter. We're supposed to believe that they end up together, but we can't because there's not enough there.

What also isn't enough is Evan's relationship with Kate, played by Elena Seepe. Kate is Evan's married friend. They get drunk one night and Kate tries to have sex with Evan, despite knowing he's gay, and it's somewhat dropped too. A scene between them towards the end, the only other scene they have, informs a lot but there are a lot of gaps that could have and should have been filled.

Jonathan Nathaniel also co-stars as Aidan Star. Nathaniel was a panelist on a MTV talk show called 1 Girl, 5 Gays. It was one of the best talk shows to come along in a while and Nathaniel was a great presence there. He's also a great presence here. More time with his character, learning about him or giving him another storyline, would have been preferred in addition to the other things lacking. Quite simply, the film is too short.

Three Stars out of Five.
Not Rated but for general audiences.
Running Time: 1 hr. and 16 mins.