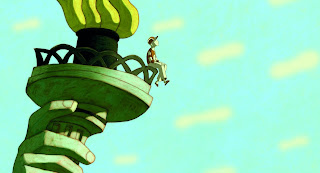 Both Marvel Studios and Warner Bros. spent hundreds of millions to pump out several, super hero films this year. GKids Animation spent a small fraction of what Marvel and WB did and has in many ways made the best super hero film of 2016. Directed by Jean-Loup Felicioli and Alain Gagnol, the French animators who made the Oscar-nominated film A Cat in Paris. The style employed in that cartoon is again used here to great effect. The colors and designs are just wondrous and at times magical. It seems like they mainly utilized traditional, hand-drawn, 2D animation with perhaps some 3D computer assistance.

The story is about Lieutenant Alex Tanner, a heroic, plain-clothes cop who tries to stop a villain named Broken Face or just The Face who has caused a blackout in the city. He has a computer virus that can do a lot more damage. Broken Face threatens to use the virus unless the Mayor gives him a billion dollars. Alex is hospitalized and can't leave, but he has a reporter named Mary who comes to help.

Alex also has the help of a little boy named Leo. Leo is hospitalized as well, but Leo has discovered he has a special power. Leo's spirit can leave his body and fly around to far places without anyone knowing. In other comic books or TV shows with sci-fi or fantasy elements, this power is called astro-projection. There is a danger to this and watching Leo confront that danger but still push forward is part of the thrill of this movie, as he tests the limits of what he can and should do.

As usual, Felicioli and Gagnol pepper in so much comedy in this movie, that it's more than entertaining. Broken Face is like a Batman villain from the 90's animated series. He's like a 30's gangster in modern times. Yet, he has a dog and two goons at whom he's constantly complaining and yelling. It's funny to watch as Felicioli and Gagnol definitely have some meta-commentary about comic book villains here.

I was more on the edge of my seat watching this than I was for a single second in Batman V. Superman: Dawn of Justice. There was more heart and pathos here. The relationship that Leo had with his parents and sister Lily resonated more than any other live-action blockbuster this year with actual human beings. It was all complimented with the Symphony Orchestra of Bulgaria that provided score on the soundtrack.