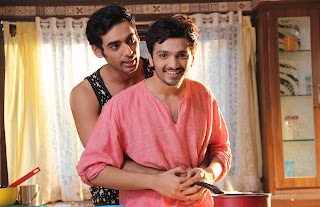 When it comes to LGBT rights in Asia, most of the countries have no protections. Israel and Taiwan are the only really safe countries in terms of having legal protections on their books and in most cases equality. Other countries are trying to make advances forward like Japan or Thailand, but there's still a long ways to go. Another country to be added to that list is India. It was only in September 2018 that homosexuality was decriminalized in that Southeast Asian country. It was then the Supreme Court knocked down Section 377 of the Indian penal code, which made it unconstitutional to arrest people for having gay sex. Transgender rights were established in 2014 but other than that, India has no other LGBT rights. Gay people can't serve in the military nor is same-sex marriage recognized. The first pride parade wasn't held until 2003, as opposed to the United States' first pride parade in 1970.

Written and directed by Sridhar Rangayan, a notable gay Indian filmmaker and activist, this movie takes place in the run-up to that Supreme Court decision. Characters talk about Section 377 and even see news clips on television about it. That basic protection, which many in the western world take for granted, hangs like a cloud over the characters in this film. However, on a fundamental level, this film is a coming-out narrative. Obviously, in western cinema and television from Europe to the United States, we've now seen a ton of coming-out narratives. The films of such have been mostly on the independent circuit. The recent Love, Simon (2018) was a mainstream example though. What makes this film special or unique is that it's made in India by an Indian filmmaker. 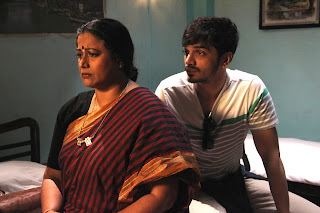 Often, Indian filmmakers who have broached this subject do so in another country. There have been exceptions like Deepa Mehta's Fire (1996), which suffered an extreme backlash and protesting. Since then, it's been slow and steady in terms of the films made in India by gay people for gay people and for greater acceptance or tolerance. Mango Souffle (2003) was the first gay male film from India. Yet, as evidenced in films like My Brother... Nikhil (2005), it was a gay male film from India that didn't show any kissing. The first Indian film to feature a same-sex kiss was in Dunno Y Na Jaane Kyon... (2010). That film though faced controversy, quasi-censorship and backlash from the actors' family.

Rangayan's film is a bit of a step backward in that it doesn't feature any kissing or physical affection that makes the homosexuality obvious. Pictures of two men in close proximity is meant to be suggestive, but close heterosexual friendship could be misconstrued, if one wanted to do so. Other people have noted the common occurrence of straight Indian men holding hands in public all the time, which in America might be construed as gay male behavior, but reportedly it's not in India, not by the general public. Yet, here it does seem to be construed that way. The reason might be because Rangayan doesn't want the controversy or backlash that would come from the depiction of physical affection that would be undeniable.

I haven't seen any of Rangayan's previous films to say if this is a pattern for him, but I don't think that it is. Indications that his previous works do possess an array of depiction of same-sex attraction or queer love. The structure of the narrative here seems almost designed to avoid depiction of same-sex attraction, which isn't a negative because that same-sex attraction is so strongly asserted in dialogue and through acting. The structure in fact is reminiscent of a recent, American release called 1985 (2018) in which a gay man goes from New York City back home to visit his conservative family in Texas. 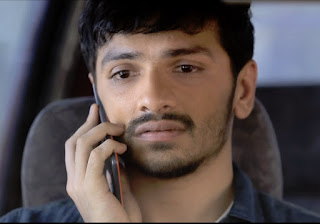 Devansh Doshi stars as Kartik, a photographer living in Mumbai with his boyfriend Aman, played by Arpit Chaudhary. His family doesn't know that he's gay. They think his boyfriend is just a roommate. Kartik has no siblings and while growing up, he was very much a mama's boy. Flashbacks reveal how close Kartik was and continues to be to his mother. He's a very sweet boy and he doesn't want to upset his parents, particularly his mother, by telling her truth, but he's starting to feel like he can't keep the secret anymore.

He's been away from home for several years. He returns home for some kind of special occasion. It's then that his father starts to pressure him to get married, obviously to a woman. Kartik doesn't want to get married, but his parents have invited a girl from his childhood as a potential wife for him. It's at that point that Kartik feels like he has to tell at least his mom the truth. 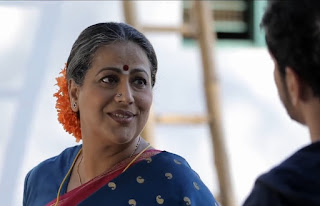 Mona Ambegaonkar co-stars as Vasudha or just "Vasu," the aforementioned mother to Kartik. She is in a lot of ways a typical Indian mother. She was wed at a young age in an arranged marriage. She never really had a say. She seems to have been a dutiful wife for about 30 years or so. She's submissive to her husband, but like her son, she has an interest in visual art. Yet, her passion isn't photography. It's painting. She never really pursued it because she was too busy being a good wife and mother. Unfortunately, she does harbor homophobic feelings and whether she can accept her son is the question of the film.

The film becomes a series of conversations between Kartik and Vasu. A large chunk of the middle section is Kartik and Vasu sightseeing while they converse. There's even a few walk-and-talk scenes. It's not maintained for any long sense of time, but, for those few scenes, this film moved from 1985 to something like Before Midnight (2013), but set in southern India. Focus is therefore put a lot on the performances of the actors of Doshi and Ambegaonkar. Both of whom deliver. Ambegaonkar especially delivers a monologue toward the end that is devastating in which she speaks on her relationship to her son and what he's meant to her life.

Rangayan's filmmaking is fairly well done. He doesn't do anything spectacular. He weaves in the flashbacks with good regularity. His coverage of the scene from which the title comes is pretty powerful, lush and beautiful, as well as crushing. Kartik and Vasu are confined to a circular boat, a kind of boat I've never seen before.

Supporting performances from Ananth Narayan Mahadevan who plays the father and husband, as well as Abhay Kulkarni who plays Ramesh, the closeted uncle who has designs on Kartik, are also quite good.

In limited release in India in January.
In select theaters in February, including in San Francisco.
Playing at qFLIX Philadelphia on March 27.