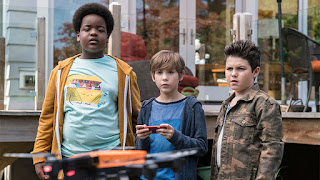 Director and co-writer Gene Stupnitsky has crafted a raunchy comedy that feels like Superbad (2007) but featuring not teens but rather tweens. Instead of high school students, it's the same foul language, drug-induced, toilet and sex humor coming from the lips of sixth graders. It's a common tactic in comedies to use the precociousness of someone under the age of 13 and often younger as a blunt instrument for saying provocative or gross things. It's not surprising that it feels like Superbad because the writers of that film are the producers here, that of Seth Rogen and Evan Goldberg.

By centering it on children or these kinds of minors, Rogen and Goldberg also seem to be invoking the same tone and sensibility as their animated film, Sausage Party (2016). Their goal was to take something intended for youngsters and subvert it with adult language, ideas and themes. It's basically the concept of combining childhood images or child characters with images of sexuality or sexual objects. Stupnitsky goes for that same thing here. He tries for the same verve as perhaps something like South Park or Big Mouth, but there are some things animation can accomplish that live-action simply can't.

For those Millennials that didn't see Superbad, another more recent example for comparison would be Booksmart. That film featuring two young women is about them trying to get to a party where one of the women hopes to hook up or at least meet the person that she likes. Along the way, they have various hi-jinks. This is essentially the plot here, except the two women are replaced with three prepubescent boys. The hi-jinks as expected involve sex or sexuality. Both films for example have the characters watching pornography when they shouldn't be. Both films also have the characters using substances they shouldn't be. In Booksmart, it's drugs. Here, it's simply beer. 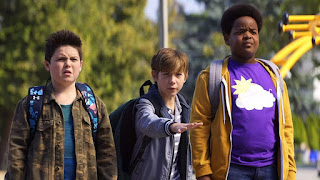 It's a theme that was echoed in the recent season, that of Season 3, of Stranger Things, a Netflix series referenced in this film directly. Like in that series, this film is about the friendships between these pre-teens, while also culminating in those friendships drifting apart. It feels a bit contrived here than in the Netflix series. The film runs too long and the so-called separation of the friends is something that feels like an unnecessary extending of the narrative. 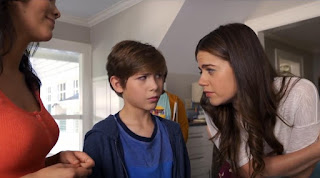 Jacob Tremblay (Room and Wonder) stars as Max, a 12-year-old who is one of three wholesome-seeming males who call themselves the "Bean Bag Boys." They hang out together and talk about stuff. They ride bikes together. They play video games together. They met in Kindergarten. Their parents are friends, so they grew up together. Unlike his other two friends, he's starting to think about girls and sex. He in particular likes a girl at his school. He's secretly working on a gift for her, which he hopes to give her and win her over.

Keith L. Williams (The Last Man on Earth and Selfie) co-stars as Lucas, the same age but the biggest kid among the Bean Bag Boys. He's also black and is arguably the nicest among the three. He's the sweetest and is the most good. As the sex, drugs and alcohol are presented, he's the one who argues against all of it. He argues for telling the truth and being up front. Unfortunately, he's the one going through the most emotional turmoil. His parents tell him that they're getting a divorce. He decides not to tell his friends and pretend everything is fine. 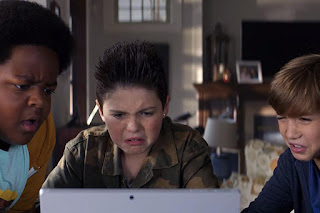 Brady Noon (Boardwalk Empire) also co-stars as Thor, the last of the three. He's nicknamed "try-hard" by the bullies at school. This is because he tries hard to fit in or ingratiate himself with the so-called cool kids or the popular students. However, he never quite tries hard enough or goes far enough. The cool kids or the popular students in his sixth grade are cool or popular because they do things that are deemed "grown-up" like drinking beer and kissing. Because Thor hasn't done those things yet, he's seen as a baby or a child, which is the last thing that he wants.

To beef up the plot, and have it not just be about kids going to a party, Stupnitsky adds an adventure element that has the three boys running around town trying to earn money and solve a problem that they didn't need or that stupidly comes upon them. As they go along, we watch and laugh as the kids try to be adults or act like they know what they're doing. It's Tyler Perry-level of comedy. Yet, we expect adults to know certain things. Children don't, so seeing kids not know what a ball gag or a dildo is can be funny the first, few times. It got to be a super-repetitive joke though that diminished by the end. The whole thing still was rather cute.