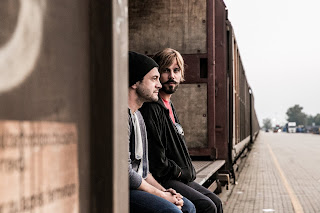 In a recent review for another film distributed by Breaking Glass Pictures, namely Bathroom Stalls & Parking Lots, I pointed out that even within independent queer cinema, there aren't too many titles about a modern friendship between a straight man and a gay man, and I mean a real friendship where even the straight guy enters into gay bars or queer-dominated spaces. There aren't too many that don't involve coming-out narratives or homophobia somehow inhibiting things in an active way. There certainly hasn't been many or any in the past decade. The only one of note was Love, Simon (2018) and even that film was mired in being yet another coming-out story and having a silly romantic-comedy plot. The only such films that I could name are All Over the Guy (2001) and The New Twenty (2009). Yet, in those films though, the focus wasn't on the friendships between the gay man and the straight man. Those friendships were just present and incidental, which is a rather normalized depiction, but it's not as progressive as some LGBTQ people might like.

Two films that are more direct examinations of friendship between a heterosexual guy and a homosexual guy include Philadelphia (1993), but that was over 25 years ago. Recently, there was Straightman (2002) and Mulligans (2009), which was just put online for free by its writer-producer, Charlie David. This film, directed and co-written by Simone Catania, isn't as direct an examination, but the focus is on this friendship between a straight man and a gay man. Their sexual orientation isn't apparent when the film first begins. Like with several films about friendships, this one kicks off when the two guys are quite young, teenagers in fact. While this teen opening would have been fertile ground to introduce their orientation and their sexuality, this introduction is only around five minutes and exists only to establish that the two boys are frustrated with where they live. They're frustrated because of its sparse population and sparse opportunities in terms of jobs and fun activities. The film then immediately time-jumps fifteen years into the future. 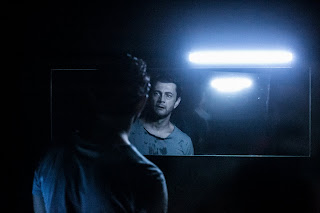 Vinicio Marchioni stars as Antonio, a man probably in his early thirties or so. He's from a small town or rural area, known as Blufi. His family owns an estate, several acres of farmland there in the middle of Sicily. When we meet Antonio as a teenager, it doesn't seem as if the farm is doing all that well. After the fifteen year time-jump, it seems as if things haven't improved. Antonio's family seems to be all gone, assuming that his family consisted of simply his parents who are now probably deceased. He's been left to manage the estate, but he's fallen behind in bills and is now too far in debt. The estate is set to be auctioned unless he can pay off the debt in a week. Instead of trying to find a way to pay the debt, he leaves Sicily and heads to northern Europe to search for a friend with whom he lost touch fifteen years prior.

Marco D'Amore co-stars as Agostino, the man who was Antonio's best friend back in Blufi. He used to be a long-haired, artistic type that simply disappeared. He left Sicily without any word as to why. He lost contact with Antonio for the better part of fifteen years. The only contact is some slight communication via the Internet and some social media. The long-haired, artistic type didn't grow up pursuing any kind of art, especially the music in which he seemed to be interested when a teenager. He instead works as a truck driver. He still has some artistic expression in that his tractor-trailer is tricked out with cool designs and lights. It also has the nickname "Volcano." 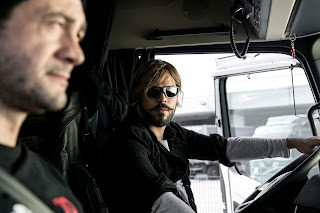 When Antonio finds Agostino's truck, it's unclear if Antonio is simply surprising Agostino outright or if they had planned to meet up but Agostino agreed to do so reluctantly. There's nothing in the dialogue that specifies why they're reconnecting after a fifteen-year absence. Either way, there's obvious tension between the two men. Agostino seems apprehensive, weary or even annoyed at Antonio's presence who comes across either nonchalant or devil-may-care. Agostino certainly has a separate life on the road that Antonio is disturbing, but the tension between them can't simply be due to that.

The mystery of why there's this tension from Agostino and what Antonio is going to do about his estate are the two main questions in this narrative. At the same time, this film is a road trip movie. That road trip turns out to be a round-trip. It starts in the boys' hometown and that's where it ends. Along the way, as the two guys get closer and closer to their original home, they relive certain memories about when they were younger and living there. Yet, it's not enough to convince that returning home is something that they should do. The opening sequence when we see them as teens and even the flashbacks certainly aren't enough. 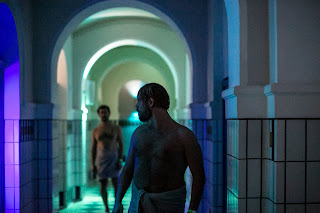 It's not like Sweet Home Alabama (2002) where the one that left really realizes what he left behind or the value of it. It's not even like another recent Breaking Glass Pictures release, that of Esteros (2016), which really builds the relationship between the two guys. In a way, it could be compared to the Oscar-winner, Moonlight (2016). That film by Barry Jenkins also involves the friendship between two boys and then time-jumps to when they are adults. It also features the two guys driving together. Catania's film spends more time or dwells with the two guys as adults and on the road, reconnecting. It ends though with a more hopeful conclusion and not the bittersweet ending of Moonlight in which we see their home's culture or environment has warped one of them into a personality that is false or deleterious. Catania's film wants us to feel like home wasn't what we thought but in a good and yearnful way.

Available on DVD and VOD on September 24. 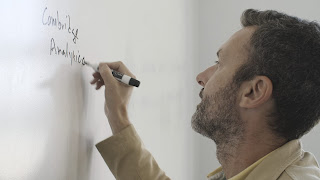 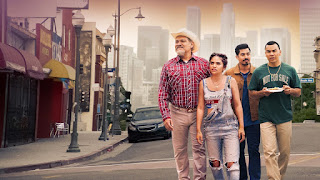