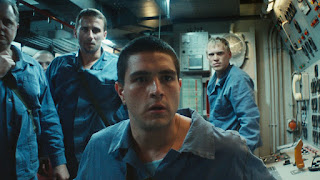 This is a survival film that reminded me of the recent The 33 (2015). That film was about a group of Chilean miners who get trapped underground. Here, a group of 23 Russian sailors get trapped under the water in an sunken submarine. It can be difficult for a thriller to be that thrilling when it's a survival film that's about people being stuck or confined to a small space and not able to go anywhere. Films like Apollo 13 (1995) and 127 Hours (2010) have done a good job of overcoming those limitations in their narratives. Even a film like Buried (2010) was able to overcome by emphasizing the performance and some clever writing. The 33 didn't really overcome it. The structure of it is just ping-ponging between the trapped men who have to wait for rescue and the rescue effort. This film, directed by Thomas Vinterberg, adapting a book by Robert Moore, details the true-life story of the Kursk submarine disaster, which occurred in August 2000. Vinterberg is able to overcome the limitations of a survival premise like this. Thankfully, the true-life events are such that there's enough here in terms of action and sociopolitical commentary that it makes for a rich experience. It's like the first episode of the Emmy-nominated Chernobyl but underwater.

Matthias Schoenaerts (Red Sparrow and Far From the Madding Crowd) stars as Mikhail Averin, an officer in the Russian Navy. He's assigned to the Kursk, a large submarine that is being sent on a Naval exercise after years of not doing one. He has a pregnant wife and a son back at home. There's barely enough time to establish him as a good family man, a loving husband and playful father. He's also a very competent officer and sailor who takes command once his submarine sinks to the bottom of the Barents Sea. He has to hold his fellow sailors together and do what he can to keep them alive, while they wait for rescue. 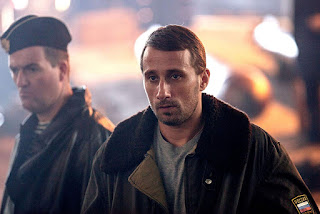 Schoenaerts is a beautiful, Belgian beefcake who is incredible in almost every film he does. He's similarly amazing here, as a man who has to be strong and a leader to nearly two-dozen men who are scared, cold and hungry. He's physical when he has to be. He's emotional and vulnerable when he has to be. His performance is a really central glue that holds the men and the whole thing from floating away.

Léa Seydoux (Spectre and Blue Is the Warmest Color) co-stars as Tanya Averin, the wife of Mikhail who is a leader in her own right. She leads the other wives and family members of the trapped sailors. She keeps getting stonewalled by the Russian government, but she doesn't give up or back down from demanding answers from the officials. Her love and desperation are on full display and she's pretty incredible too. 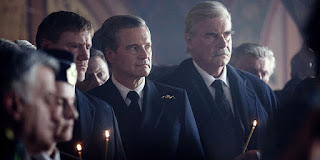 Colin Firth (The King's Speech and A Single Man) rounds out the cast as David Russell, a commodore with the British Navy. He hears about the submarine disaster and he's quick to try to help. However, due to Russian pride and stubbornness, David isn't able to help, even though the British Navy is a better equipped and trained force to accomplish the rescue. David's team could get the job done faster, but he's held back, showing not only the incompetence of the Russian government but also its lack of concern.

Vladmir Putin was president of Russia during this incident, but the film doesn't mention him specifically. Yet, this film couldn't be more critical of Putin's government, even if it tried.