Anytime you make a documentary or a documentary series, the best thing to have is a really compelling character to follow. Filmmakers Eric Goode and Rebecca Chaiklin certainly found that in Joe Schreibvogel aka "Joe Exotic." Joe has been described as a completely insane, gay, gun-toting, drug-addicted redneck. If he wasn't a real person, you'd think he was a cartoon character. Joe's behavior for the most part is that of a cartoon character. It's mainly because he's a guy who wanted to be famous or he's a guy that's incorporated cameras into his life. Many people have used cameras to document their lives. It's a rare few that have actually built their own TV studio in order to broadcast their own live show on the Internet of which he made himself the star. He hired a TV director to help him run the studio and that guy recognized how much of a personality Joe Exotic was, so that director decided to make a reality show about him, so there was a lot of material and video footage from which to craft a series like this.

Because that series is now on Netflix, it means that there is some crime at the center, and, again, because it's on Netflix, that crime is invariably murder, or in this case attempted murder when it comes to Joe Exotic. There's also a possible murder in the case of another prominent character in this series. What this series really details is a legal battle between Joe Exotic and an animal activist named Carole Baskin whom Joe threatens to kill and even makes moves toward the direction of actually killing her. 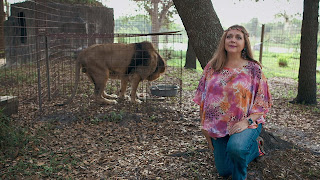 In the late 90's, Joe Exotic opened Greater Wynnewood Exotic Park or referred to as G.W. Zoo. It's over a dozen acres of land in Wynnewood, Oklahoma, which is about a hour south of Oklahoma City. The park featured dozens of species of animals, but the biggest attraction was the big cats, especially the tigers. Joe Exotic boasted to possess over 200 big cats at the park. In the early 2000's, the animal-rights organization, known as PETA, has cited the park for animal abuse. Yet, one of the chief critics of Joe's park was Carole Baskin.

Baskin ran an animal sanctuary called Big Cat Rescue, near Tampa, Florida. It's over 60 acres that's dedicated to housing exotic or big cats that have been injured or orphaned. People can come visit, but Baskin is also a lobbyist of sorts, trying to end ownership and trade of exotic felines in the private sector all together. She's also working on ending people being able to handle the cubs of big cats, meaning literally people being able to hold cubs in their hands or arms. This goes against Joe Exotic because the premise of his park is to have people personally handle the tiger cubs. 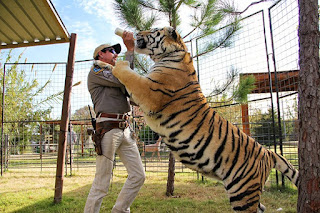 The series then details the lives of Joe Exotic and Carole Baskin as they go back-and-forth saying why the other is wrong. The film though mainly sticks with Joe Exotic whose hatred of Baskin becomes increasingly more intense. He even goes as far as physically threatening her, even on his live TV show. Eventually, he's arrested for hiring someone to kill her. The tact here is a little different. It doesn't feel like Making a Murderer in that it doesn't feel like the filmmakers are on the side of Joe Exotic. There's no undercurrent here that the justice system got it wrong. Making a Murderer felt like an indictment on the criminal justice system. This feels more like an indictment on Joe Exotic, even though some might walk away thinking that he didn't deserve to be arrested, let alone convicted.

However, there is a diversion into the back-story of Carole Baskin that is very intriguing and throws doubt onto Baskin and who she is. Yet, it just underscores how this whole thing is just a web of crazy stories that just unfold better than any piece of fiction. This story and the connected stories prove how nonfiction can often times be stranger than fiction. It also puts into the spotlight a queer story that would shatter illusions about gay people and even same-sex attraction. 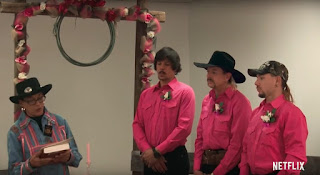 Joe Exotic is a gay man unlike any that's probably been put to screen thus far. He's a man who has been married several times to several men. He even had a polygamous ceremony with two men at once, which may or may not have been legally binding or official. He's from a red state who doesn't reject those seemingly red state values. He loves his guns. He doesn't like government interference in anything. Given his reality TV star aspirations, he's more than likely a Trump supporter. It's not clear what his religious affiliation is, but, given his openly gay life, it's probably not a strong religious affiliation. 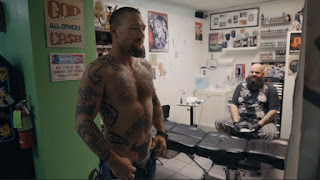 Regardless, it does perhaps say something about sexuality being fluid or more fluid than what some might think. The documentary doesn't interrogate this issue as much as some might want. Finlay is interviewed for this film, but he doesn't go into the details or is challenged about his sexuality at all. Yet, it's perhaps to the film's credit that the sexuality of Finlay or Maldonado isn't questioned but more or less accepted. There are some homophobic comments made by some people, but it feels like that even in a red state like Oklahoma, their homosexuality and even their polygamy aren't at odds at all. Plus, the Internet in the wake of this series has commented immensely on how sexy John Finlay is, despite his lack of front teeth, presumably due to a meth addiction, but, he's very much an expression of hunky and traditional masculinity, just tattooed and gun-loving. It's a wonder if that Internet obsession though is fueled by the queer community, which loves to latch onto those who are straight-acting, not that Finlay's persona is an act, but he's an archetype that the queer community seems to want to co-opt.

One last point is that the series introduces a third person named Bhagavan Antle aka "Doc Antle." He owns an animal park called Myrtle Beach Safari. It's an animal park in Myrtle Beach, South Carolina. His operation is similar to Joe's operation, except Doc Antle is way more organized and not as antagonist toward his critics. Yet, he's just as much an adversary to Baskin. He just doesn't feel the need to physically threaten her. He touts himself as this guy who embraces a lot of Indian or eastern philosophy. He also has more clout because he's had experiences working with Hollywood and a lot of established people. However, when the layers start being pulled back with him, it could be argued that he's running a sex cult down in South Carolina. This series doesn't then become a continuation of Wild Wild Country, but it gives you another idea of how much crazy is in this docu-series.