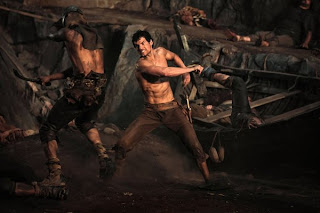 In all fairness, I'm not a huge fan of these sword-and-sandal films, and I supremely lost interest in this movie half-way through it. The title is Immortals, which refers to the gods of Greek mythology, but this movie isn't about the gods. The real title should be Mortals, or, perhaps riffing off the video game, it should be called Mortals Combat because that's what it's truly about.

At least in the recent Clash of the Titans (2010), the main character was the son of a god. Here, the main character is Theseus, which isn't a slight against Theseus, but he's just not a god or son of one. If you know anything about Greek mythology, you know that Theseus is actually a great figure, but the writers of this movie, Charley and Vlas Parlapanides, two Jersey boys, don't make that great of a figure of him, at least not in a way that's as great as the actual mythology. Theseus is great in a more generic way.

For example, in Greek mythology, Theseus is a king. He's in fact the King of Athens. In this movie, he's just a peasant basically, a commoner, which is supposed to make his journey that much more epic, but it's not. Also, in Greek mythology, Theseus kills the Minotaur, which is a half-man and half-bull creature made by Poseidon. The Minotaur ate humans and needed to be contained in a Labyrinth. In this movie, Theseus just kills a guy who wears a bull mask. It just seemed odd that if you're going to do a movie about Theseus and incorporate Greek myths, that you wouldn't go all the way. This film sells Theseus short.

There is a Zack Snyder-aesthetic applied to Immortals, which gave me quite a few flashbacks to 300 (2006). As opposed to Snyder's creation, which was glorious and beautiful, director Tarsem Singh Dhandwar gives us a manufactured world that feels more tactile. What hurts Tarsem here is that photographically this movie takes place too much in darkness. It's not that Tarsem doesn't make his images eye-popping and rich. It's merely that he's limited. His palette is limited in a way where he wasn't in The Fall (2006). Tarsem still crafts absolutely gorgeous frames from beginning to end, but his cinematography here feels bounded.

I also don't suppose I can complain about Henry Cavill who stars in this film as Theseus. For interested viewers, Cavill made headlines last year when it was announced that he would star in the next Superman movie as the iconic Superman, and many people wanted to use Immortals as a test to see how he would do in the major role. In terms of physicality, Cavill is perfect. For me, however, in terms of emotionality, he seems only a slight step above Gerard Butler, who I wouldn't argue is a good actor.

As far as all the other actors are concerned, including Mickey Rourke, Freida Pinto, Stephen Dorff, Luke Evans, Isabel Lucas and Kellan Lutz, I can say they all looked good. They weren't given much to do though. Evans, Lucas and Lutz who played the gods were sold short too. I wish they would have been given more in terms of dialogue and character development.

Two Stars out of Five.
Rated R for strong bloody violence and a scene of sexuality.
Running Time: 1 hr. and 50 mins.