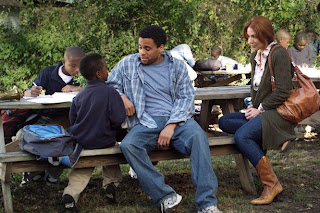 The similarities between these movies might be so due to the fact that both have these Christian sensibilities. The main difference is that Unconditional is more of a two-hander. Lynn Collins stars as Sam Crawford, a painter and widower in Nashville, Tennessee, who reconnects with her childhood friend whom she hasn't seen in 20 years. Michael Ealy co-stars as Joe Bradford, a black man who is on dialysis but who spends most of the time helping young black kids in his neighborhood, providing basic needs like food or simply encouraging and trying to enrich their lives.

Sam becomes attached to two of Joe's young kids, a brother and sister named Macon and Keisha, played by respectively by Kwesi Boakye and Gabriella Phillips. Sam does so as a way of trying to cope with her husband's death. Diego Klattenhoff (Homeland) plays Billy Crawford, her late husband who is murdered in a back alley when he's shot in a botched robbery. The killer is never caught, which haunts Sam.

Sam becomes obsessed with finding the killer, especially when she begins to suspect a man named Anthony Jones who lives next door to Macon and Keisha. The reason she suspects him is at first due to a red hoodie that may or may not be similar to what her husband's killer wore. In the wake of the Trayvon Martin shooting, this suspicion has a lot of dimensions. Sam is white and Anthony is black, so the situation speaks to the tense race relations that were brought up as a result of the Trayvon Martin shooting.

Unfortunately, writer-director Brent McCorkle telegraphs pretty early that Sam's thoughts about Anthony are as Joan Fontaine's character in Alfred Hitchcock's Suspicion (1941). It's obvious misdirection. It's an obvious red herring. For Sam to latch onto the first black man she sees with a hoodie is rather prejudiced, or an odd choice for her to make given the flashbacks we see of her childhood.

McCorkle's story is built on many flashbacks. The first takes us 20 years into the past to when Sam and Joe first met in elementary school. She's the only white person to befriend him, a shy, black boy. She apparently didn't see color back then, but, 20 years later, unfortunately color is all she can see. This would have been interesting, but we know her suspicion is a canard, there's no weight to it.

What would have been more powerful is if Sam's suspicions had turned to Joe. This movie is based on a true story. Joe Bradford is in fact a real person. McCorkle's screenplay is partly biographical of Bradford. Therefore, McCorkle probably felt compelled not to distort or fudge any facts, or deviate too much from reality, but if the story had centered on Sam's suspicion of Joe, things would have been better.

The movie would have benefited if Sam as a character were removed all together. If this were a biopic of Joe Bradford, his time in prison and how he's now trying to improve his community would have been more appealing. While it was romantic to see Sam and Billy riding horses and camping out at night because both Collins and Klattenhoff are two pretty people, it's ultimately less inspirational and pulls from the better inspiration, which is Bradford's life, and of course watching Ealy and his gorgeous eyes is something that any movie or TV show would be improved by having more of.

Three Stars out of Five.
Rated PG-13 for some violent content and mature thematic elements.
Running Time: 1 hr. and 37 mins.