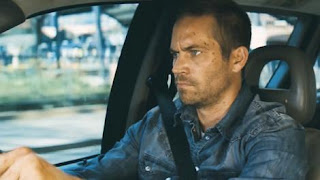 For the better part of a decade, Paul Walker has been mostly associated with The Fast and the Furious franchise of films. When most people think of the blue-eyed hunk, it's him behind the wheel of a fast-moving automobile. Having him star in a film that is essentially him behind the wheel for eighty minutes makes sense. It's typecasting. If one includes Joy Ride, then it seems as if Walker should probably change careers and become a NASCAR athlete or a stunt car driver. It might have even been better if Walker were cast in Nicholas Winding Refn's Drive instead of Ryan Gosling. Given that Gosling barely speaks in that movie, it would have been perfect for Walker whose greatest weakness comes when he has to speak.

Paul Walker stars as Michael Woods, an American who travels to Johannesburg, South Africa. He was recently released from a prison in Texas and he wants to visit his girlfriend Angie who works in the U.S. embassy there. He gets a rental car from Hertz, but a mistake is made. Michael doesn't get a car. He gets a minivan. Michael doesn't like it but he accepts it. As he drives from the airport to the embassy, he finds a cell phone that isn't his own and a gun in the van. He also finds a kidnapped girl tied up in the trunk.

Written and directed by Mukunda Michael Dewil, this entire story is told from inside the minivan. Dewil places his camera in the passenger seat next to Walker and refuses to remove it from the ride. Even during crazy and intense car chases, Dewil resists the urge to give any exterior shots of that van. The camera never gets out the van and Walker's character doesn't get out either, even when he probably should.

Yes, it's a gimmick, and, yes, it becomes absurd after a while, but, by the end, Dewil's decision to remain firmly inside that van from beginning to end is respectable and does build adrenaline, as Dewil drives to his climax and denouement. Yet, having a character essentially confined or trapped to a moving vehicle isn't new. The film that probably could draw the most comparison is Speed (1994). Yet, The Lady Vanishes (1938), Murder on the Orient Express (1974), Cosmopolis (2012) and Life of Pi (2012) are also possible comparisons.

The problem is Paul Walker's performance is terrible. He's worse here than Keanu Reeves in Speed. Suraj Sharma in Life of Pi does a better job and Sharma had never acted in a movie before. If you are going to be locked in a minivan with anyone, Walker is fine because he's very easy on the eyes, but anytime he has to talk or emote, he loses me. His character has the equivalent of temper tantrums that are just awful to watch, which might be the point, but it doesn't work on screen.

His character just makes some stupid decisions and Dewil does little to help. Michael's decision to take the minivan when he knows it wasn't the car he wanted was simply lazy. Dewil should have made it more than simply him being too lazy to get the correct car. When he finds the kidnapped girl, he could have done a million other things that would have made more sense than what he does, which Dewil makes him do for no other reason than to advance his action plot.

Even though the final car chase is rather impressive, it's ultimately unnecessary. Michael is basically framed for a horrible crime, but he gets evidence that can prove his innocence on his phone. He has this evidence for what feels like hours before he's forced to go on the run from the cops. He thinks he has to drive this evidence to a man at a courthouse. He only thinks that because Dewil wants to conform to his trapped-in-a-car gimmick, but any person in that predicament would have simply emailed or phoned that evidence to Angie at the embassy or to CNN or some major news network.