TV Review - Finding Me: The Series 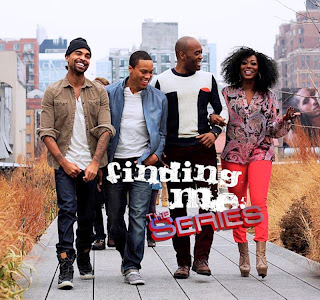 Based on the independent film Finding Me (2009) as well as the sequel Finding Me: Truth, this show was released exclusively on YouTube. It focuses on the lives of four, young African-Americans living in Jersey City. Season 1 consisted of 13 episodes. The first 11 are referred to as minisodes because each installment concentrates on one of the four, not always to the exclusion of the other three, but the minisodes differ from the two movies in that there is less interaction between more than two of the four and absolutely no cross-cutting between the storylines. Episodes 12 and 13 break this rule and the four characters do intersect.

The structure is similar to that of the fourth season of Arrested Development, the resurrected, TV sitcom made available on Netflix. Creator Mitchell Hurwitz crafted 15 episodes where each one focuses on one and only one character out of a cast of seven. The writer and director of Finding Me: The Series, Roger S. Omeus, Jr., has a principal cast of four characters: Faybien Allen, Greg Marsh, Tammy Jones and Omar. I don't believe seeing the two films is absolutely required in order to watch and understand the series. Not watching them might even be preferred, but I feel seeing the movies would enrich the viewing experience for the series.

On the web site for this series, there is a quick bio for each character listing each one's profession or job. Aside for Faybien briefly, we never see any one at their jobs doing any actual work. Each minisode instead concentrates on each character grappling or dealing with his or her love life. From episode 1 to 11, each character has a trajectory with either one relationship or one kind of relationship at stake.

Faybien's trajectory is chiefly about his relationship with Morris, played by Kenyon L. O'Brien. Morris claims to have never been in love. Given the grey hairs in his beard, Morris is obviously not as young a man as Faybien. He's probably mid to late thirties, so one wonders at his age why he's never been in love. Morris does have a secret that answers why, but it won't be revealed until later. Things won't come to a head until episode 13, the last of the first season. In that episode, Faybien has to decide the fate of his relationship with Morris.

Greg, played by Eugene E. Turner, is Faybien's best friend. He's a bisexual cook. He used to have sex with women but doesn't any more, not after getting one pregnant. He still finds women attractive but he seems to exclusively date men now. Greg's trajectory isn't about what one person he wants but rather how he wants to be once he does find that one person. Greg evolves from being a player to wanting to be monogamous. This may be an age thing or the fact that he's having a baby.

Tammy, played by Miste Roule Ryals, is the mother of Greg's future child. In the series, she's about six months pregnant. She's mostly straight but has had lesbian experiences. Her two best friends are lesbians, a lesbian couple in fact. She works as a make-up artist, but again you never really see her doing that job. You mainly see her talking to her friends about her dilemma of dating men while being pregnant and not scaring them off or being able to hold onto them.

The fourth character in the show's quartet is Omar, played by Bry'Nt. Bry'Nt goes by one name like a few musicians do. He's a New York rapper. Omar, however, isn't a music artist. He's a former drug dealer. When he's introduced in minisode 3, you wouldn't know he had a drug past unless you divined it. One could assume just by looking at him that he's possibly a street thug. Yet, there's more to him.

If you didn't see the second movie, one would wonder if this character is completely brand new. He's not. Omar was the boyfriend of Greg's former roommate, Jay. Omar's trajectory is tangentially about dealing with the loss of Jay whose disappearance is a bit of a mystery in the series. However, by episode 13, which is titled "Turning Point," Omar's trajectory becomes more overtly about if he'll return to his drug past.

The production value is low if virtually non-existent due to the fact that Omeus wrote, produced, directed, filmed and edited this series pretty much all by himself. The driving force for anyone who watches must be instead an investment in the characters. Good acting aids in that investment, and, in terms of performance, Miste Roule Ryals and Bry'Nt are the real standouts.

Ryals has such a great voice and bold presence that she can't help but dominate or outright steal whatever scene in which she's in the room. If you watched the movies, J'Nara Corbin who played Amera and Maurice Murrell who played Jay had that same ability. With both those movie actors gone, Miste Roule Ryals fills the void.

Bry'Nt could possibly go the way of some great rappers-turned-actors like Tupac Shakur who definitely had good instincts and who certainly grew as his career went along. Bry'Nt seems like he has similar instincts to Shakur. It's never more apparent than in minisode 8. Omar visits his ex-girlfriend and mother of his child, and he gets into an argument that has echoes of Shakur's character, Lucky, in Poetic Justice (1993) but intersecting with Oneil Cespedes' character, Boo, in The DL Chronicles.

Featured music from Marck Angel and K'bana Blaq are well used. Episode 13, which is the largest of all the minisodes, has a running time that could make it a theatrical film. It was produced that way and has the most propulsive scenes of any installment and ends on very shocking moments, hooking viewers for Season 2 coming in 2014.