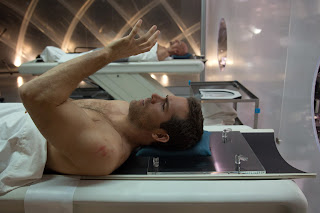 The only true criticism is that if not for the credits to the contrary, I wouldn't have been able to guess that Tarsem Singh directed this movie. I haven't seen all of Singh's films, but, of the ones I have, I was thoroughly impressed with either the cinematography, the production design or the costumes, meaning the aesthetics. His stories or narratives have never been that complex or all that nuanced. Yet, he's always been a master craftsman, a master in crafting amazing, if not jaw-dropping visuals, even when those visuals have been mostly CGI. Singh is an Indian filmmaker who invoked that country's Bollywood tradition at the tail-end of his film Mirror Mirror, and a lot of films have always invoked or embraced dazzling colors or eye-popping forms and movements. This film, his fifth feature, is different because it's stripped almost bare. There are no dazzling colors or eye-popping anything. Visually, it's dull and flat. The only thing that stands out is the gorgeousness that is Ryan Reynolds, and a beautiful, if tiny, Caribbean island.

Ben Kingsley (Gandhi and Schindler's List) kicks off the story as Damian Hale, a rich and powerful business man who is dying of cancer. He is apparently a widow, and his only family is his adult daughter with whom he's estranged.

He's recommended to a new health facility called Phoenix. This facility has an incredible process called "shedding." This process transfers the mind of a dying person into the mind of a younger, healthier person. Unless I'm mistaken, this might have been an actual episode of The Twilight Zone, an episode called "The Trade-Ins," which aired back in 1962. People in that series might have been transferred into robotic bodies or bodies that are artificially grown, which is what Damian is told. His new body will be artificially grown, fully made in a lab until it's adult size.

Ryan Reynolds (The Proposal and Green Lantern) stars as the adult-size but younger, healthier and more in-shape body into which Damian's mind gets transferred. Reynolds is therefore Damian Hale too. However, he assumes a new identity and calls himself Edward Kitner. He saved a fortune for himself and is sent to New Orleans to restart his adult life. However, there's a side effect. He has what are called hallucinations but what seem like memories of another life.

Matthew Goode (Watchmen and The Imitation Game) plays Albright, the scientist who runs the facility where the shedding takes place. He also helps to acclimate and transition people like Damian into their new lives, and yes, it becomes apparent immediately that Damian is not alone. Multiple people have undergone shedding. Albright, howeer, seems very aloof, methodical and secretive about the whole thing.

He makes an argument for this shedding process and why it's a good procedure. Clearly, this process is not for everyone. One reason is ostensible and obvious. The other reason shedding isn't for everyone is meant to be hidden and then a surprise later that's dropped in the second act.

Albright's argument is that he thinks there are so-called brilliant minds that need or should be preserved like Albert Einstein or Steve Jobs. Yet, Albright seems willing to perform this process for anyone because of his own personal motivations or if the person has the money. This limits the process only for the wealthy, or whoever Albright deems worthy. This is at once problematic and purposeful.

This movie suggests the idea of immortality, which is a thing that not everyone should have. Population control is a subject not often broached in films and this one doesn't broach it either, but it does raise the inherent issue that death is necessary. Immortality for all humans at the rate of current, population growth would eventually became disastrous or untenable.

This movie doesn't deal with this logical conclusion. It circumvents this with the aforementioned surprise dropped in the second act. The surprise is population control isn't required because Albright's shedding is actually a tit for tat. Unfortunately, on an intellectual level, the movie would be better without that surprise or twist.

Yet, the surprise kicks off the action and sustains the action through to the end. The action is diverting and entertaining enough. There's some thrilling scenes. The first, fight scene is probably the best, almost in spite of the fact that it comes out of nowhere.

There's some good supporting actors, including Derek Luke and Victor Garber who is basically playing a character whose function is similar to that of Garber's character in Argo, at least initially. Natalie Martinez (Under the Dome and Secrets and Lies) is a bit short-changed. Her character is blind-sided in a sense, and I wish her character wasn't, and had more knowledge and input, but overall I enjoyed the film.

Four Stars out of Five.
Rated PG-13 for sequences of violence, some sexuality, and language.
Running Time: 1 hr. and 56 mins.