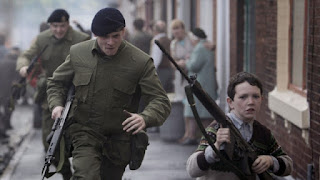 The movie stars Jack O'Connell who won the favor of a lot of American critics when his film Starred Up came to the United States. I was not a fan of that film, but O'Connell did show potential as an actor. If O'Connell is known to American audiences at all, it would be through his leading role in Angelina Jolie's Unbroken, which came out Christmas 2014. That movie mainly has O'Connell as a soldier being lost from his fellow troops and eventually being captured by the enemy in World War II. Unbroken is actually the third feature that O'Connell did in the span of two years in which he plays a soldier. The first was Private Peaceful (2012). The second is this one, but, in the U.S., it was released after Unbroken, and strangely has a lot of echoes to Jolie's sophomore effort as director.

Jack O'Connell plays Gary Hook, a private in the British army who is assigned to serve in Belfast, Ireland, in what we assume is the year 1971. He and his fellow soldiers are guarding a street during a house-raid when protestors get out of control and forces the soldiers to retreat. In the melee, Gary is separated from his fellow soldiers and becomes cornered, virtually captured, by the protestors. Some of whom want to kill him. The movie then becomes about Gary trying to escape and get back home. There's also some moments of physical endurance. If this film weren't actually made before Jolie's film, then I would say this film is basically a small-scale version of Unbroken.

World War II was such a large-scale event that little to no explanation of the conflict is necessary. This film is so specific that a bit of an explanation is necessary. Gregory Burke's screenplay provides a sliver, but it's not enough to have a non-native of Ireland or the United Kingdom fully understand the nuances at play. There's certainly not enough explanation to have most non-natives care.

For my own understanding, I did a quick read on Wikipedia to catch me up on what was going on in Belfast, 1971. At the time, Ireland was experiencing a kind of civil war. Even though it wasn't a religious war, the conflict was divided along religious lines. The Protestants were on one side and the Catholics were on another. The Protestants, or the Loyalists, dominated the government and controlled the police, so the Catholics, or the Republicans, formed their own paramilitary group called the Irish Republican Army, or IRA. The IRA, much like the Confederate Army during the American Civil War, wanted to secede Northern Ireland and make it a separate territory from the rest of the UK. Yet, the IRA was deemed a terrorist group mainly due to their violent acts, and the British army was called to block or fight them.

This is where Gary enters. He's basically dropped in the middle of this conflict. The protestors he faces are presumably Irish Catholics and the people who attack and try to kill him are a faction of the IRA. Where the movie gets confusing is that Burke's script introduces members of the British army, including a Captain, who are in league or in bed with IRA members. Unfortunately, Burke's script doesn't establish these members on both sides well enough that I understand why it was even in the movie. I get that it's important that we have context and we get to know the people chasing Gary, but that context is never fully developed.

Directed by Yann Demange, this movie works, if it works at all, based on not on the context, the character developments or complications in the plot, but just on the sheer adrenaline, as the latter half all takes place in one heart-pumping night. Whereas Jolie's film stretched out the survival and endurance of O'Connell's character over a long period of days, weeks and even months, Demange's film focuses on the survival and endurance of O'Connell's character over the course of about 12 hours or so. After a point, it becomes about sheer adrenaline, so nothing else matters.

However, there is a point where two young boys die. One boy looks like he's no older than 12 or 13. The other boy is a teenager who looks like he's probably no older than 19. Both of them die, and, aside from the shock of it, there was no emotion there. It just would have been more effective if the film had focused a little more on these boys and developed them. It's not to say the young actors weren't good because they were, but there's only so much they can bring.

Three Stars out of Five.
Rated R for strong violence, disturbing images, and language throughout.
Running Time: 1 hr. and 39 mins.