This is the third movie in a series that began in 2012. Jon Garcia wrote and directed The Falls, a romance between two Mormon missionaries in Oregon. The first film is about how the two meet and realize their feelings for one another, as well as what's involved for a young Mormon on his mission. The second film was as much a typical, coming-out story where a married man has to reconcile his same-sex attraction and his specific love for another guy. This concluding chapter to the trilogy is mechanically about getting these two young men who fell for each other but who were separated back together. It's just maneuvering two chess pieces who don't have that many hurdles to their inevitable reunion. The internal and external forces related to the Mormon church, which are supposed to be challenges, don't factor too much in this equation.

Nick Ferrucci stars as RJ Smith, a writer who lives in Portland. It's a year later from the events of the second film. RJ moved to Portland from Seattle where he grew a beard and has settled into his hipster and openly gay life. He's single, and into the outdoors and nature. A diverse group of friends surrounds him and he's no longer Mormon in the practical sense, meaning he doesn't pray nor does he attend any Church of Jesus Christ of Latter Day Saints (LDS) establishments.

Benjamin Farmer co-stars as Chris Merrill, a former pharmaceutical representative who is now studying to become a lawyer. Chris was married to a woman and has a daughter who's now 5 or 6. He lives in Salt Lake City, which is about 800 miles south of Portland. He's divorced but co-parents with his ex-wife. He's not committed but he does travel by plane to Portland to visit RJ. It's not clear what he hopes to get out of it or where he thinks it'll go. He obviously loves RJ whom he occasionally calls "Ricky" but he's still very much connected to the church. He does regularly pray and most likely attends LDS establishments. 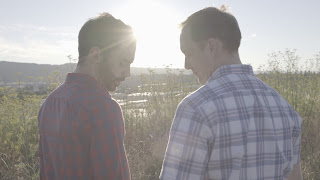 Despite living relatively close, the two are worlds apart. Initially, the problem is how they will navigate their distance and religious differences. How will they bridge the gap not only geographically but also socially, or if they will at all? An added wrinkle is that the Mormon church issues a new guideline declaring that children of same-sex couples won't be baptized. This means that if RJ and Chris became a functioning couple that Chris' daughter could never become Mormon herself. Because Chris is still connected to the church and very much so, this would perhaps be a roadblock to them becoming a couple at all. Yet, the question of the mother of Chris' daughter doesn't come up. Perhaps, Chris's ex-wife could have their daughter baptized. There could be a technical way around this new guideline for Chris, but that's neither here nor there in regards to this movie.

Ultimately, Garcia is a very hopeful and optimistic filmmaker. He does grapple with the essential struggle of gay Mormons that is expressed in RJ's dialogue when he says, "Either you're gay or you're a man of faith. You can't be both." The movie shows us examples of people trapped on one side or the other. It gives voice to those gay men, young and old, dealing or stuck in this struggle. The movie also provides a glimpse into the inner-workings of the Mormon church and how it can be difficult to those with same-sex attractions. It is just a glimpse though. 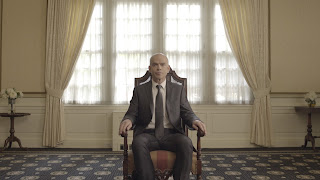 Bruce Jennings plays Noah Merrill, the father of Chris and a member of the hierarchy at the Mormon church. That kind of hierarchy or authority was confronted in powerful ways in the previous two movies. For this movie, Garcia again confronts that authority, utilizing Noah this time. In fact, Noah's scenes are partially fueled by recent events like the Orlando nightclub shooting on June 12, 2016. Yes, there is a big bow put on the end, a rainbow in a sense, but the true hopefulness here is shown through Noah as he sits and confronts the Mormon authority about this issue.

Unfortunately, Garcia's film poses a question that it doesn't really answer. That question in regards to the LDS guideline comes from RJ himself to Chris. RJ asks, "How can you be a part of something that alienates parents from their children?" RJ continues to Chris, "How are you okay with the way they treat you, or the way they treat your family, your daughter?" The answer seems obvious, but the coda or epilogue to this movie seems confident that RJ and Chris have figured it out. Yet, the specifics of that intersectionality of Mormonism and homosexuality both operating in tandem and in the light of day alludes the audience. We never know how Chris is okay with it, just that he is. 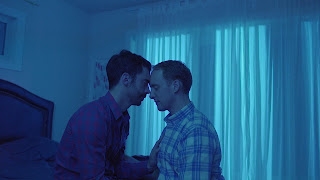 As always, Ferrucci and Farmer give great performances. Their best material came in the previous films, as this movie isn't rife with the same amount of drama or tension. If anything, there's less. There was potential drama with the character of Ryan, played by Curtis Edward Jackson, a potential love triangle, but Garcia makes that a non-starter. The end is almost a foregone conclusion. The memorable moments mostly come from the protagonists' fathers. Jennings is one, but Harold Phillips who has played Tom Smith, the father of RJ, in every movie, also has a very surprising scene that makes us want to know more about him and retroactively curious about his latter scenes in the first film.

Not Rated but contains scenes of intense sexuality.
Running Time: 1 hr. and 41 mins. 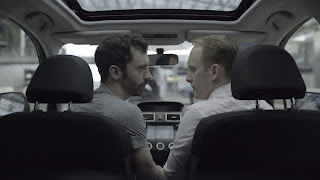 Here are my reviews of the first and second films in this trilogy: The Falls (2012) and The Falls: Testament of Love (2013).