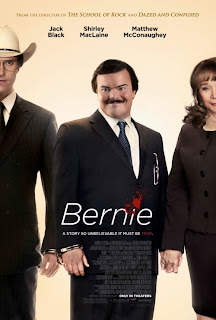 Jack Black plays Bernie Tiede, the real-life, convicted killer from Carthage, Texas, who despite his conviction was beloved in the town by everyone. Even after his confession, the people in the town still defended Bernie. Richard Linklater constructs this movie about Bernie in a manner similar to Infamous (2006), the film about Truman Capote, as well as another real-life murder. Linklater intersperses throughout the narrative interviews from the people in the town commenting on Bernie and his murder-victim in order to tell why they're defending a killer.

What kills me is that in the end credits, there is video footage of the real Bernie Tiede talking to Jack Black. With all the interviews that Linklater did, I wish he would have gone ahead and done a full-fledged documentary. It seemed like he was half-way there anyway. Plus, it would have allowed him to do more with this story that he either wouldn't or couldn't do here. As it stands now, my knowledge of who Bernie was feels superficial.

For example, title cards appear on the screen to clue the audience as to the topic of the interviews at any given time. One title card asks, "Was Bernie Gay." We hear a bunch of speculation from the interviews, but being that Linklater and/or Black had access to Tiede, instead of speculation, either Linklater or Black could have gotten the answer from the horse's mouth, but apparently didn't. I don't know why.

Linklater perhaps makes the point that this is the issue at the core. Perhaps the people of Carthage can defend a killer because they don't really know him. They think they do based on all the good he's done, but maybe that's a facade. I don't think that Bernie is putting up a facade. I believe he's earnest and sincere but there are aspects to him they are questionable. He might be totally boring otherwise. He probably just snapped one day, but we're not give the chance to know. All we have is speculation.

Shirley MacLaine co-stars as Marjorie Nugent, the murder-victim. Her character is particularly awful and she makes the case for a little old lady deserving of murder. She's bitter. She's racist. She's controlling. She's someone who didn't like people, except Bernie for a while, and people didn't like her.

Matthew McConaughey also co-stars as Danny Buck Davidson, another in what's becoming a long list of lawyers that McConaughey has played. He was exceptional in A Time to Kill (1996) and The Lincoln Lawyer (2011). Here, he's basically hitting notes he's hit before. It's not a challenge, so therefore McConaughey doesn't have to exert much effort.

Whereas Infamous was clearly a docudrama, this movie feels like a docu-comedy. It's obvious from the tone of the interviews that Linklater is allowing for laughs. Black is known more for his comedies, which is probably why Linklater hired him. Like with most comedic actors, this is Black trying to do something more serious and dramatic. There were times though that I thought this movie about Bernie would become Weekend at Bernie's (1989), which is similar in that both deal with some trying to hide a death.

Three Stars out of Five.
Rated PG-13 for some violent images and brief strong language.
Running Time: 1 hr. and 39 mins.