The film starts with a shot of space and the twinkling of a few stars, millions of light-years away. It then cuts to the inside of a car as a family of four is shepherded someplace. It's almost reminiscent of Terrence Malick's The Tree of Life where Malick tried to connect the cosmos, the vastness of time and space as well as Earth's past to the present lives of a single family, especially as it related to the experiences of its young boys.

Here, writer-director Joshua Lim uses the existence of space and our modern-day observations of it as an argument for atheism. Malick used space and history as an argument for faith and religious ideal. However, Lim has a scene where a staunch atheist quotes Christopher Hitchens to his younger brother, saying that life on this planet compared to the vast emptiness of space is proof of the universe's godlessness.

Craig Jordan stars as Nate Flanigan, a college student who moved back home to be with his mother after his father died of stomach cancer. He works as a personal trainer at a local gym. It's not made clear what he was studying, but he does ask his mother about a dream of fashion design that she gave up for the more practical vocation of nursing, and it's a wonder if he's as much asking for himself as he is for her.

Michael E. Pitts co-stars as Steven Flanigan, the older brother of Nate. It's odd because Steven looks more like a personal trainer than Nate. Steven is much bigger and more muscular. Yet, Steven left home to study pre-med in Maryland because he wants to be a doctor. He went away while Nate was still in high school and before his father passed. What makes him return is the sudden death of his mother, which devastates Nate.

The film then takes place in the days immediately after their mom's funeral, as Steven stays with Nate in their family home and helps to take care of his younger brother. They both take time off work and school to grieve and to remember their lives together, particularly why they stopped talking to each other.

Lim directs this movie in the same style as his previous film The Seminarian. There are limited angles and absolutely no camera movement. The movie only possesses a handful of close-ups and very few edits. Often, Lim lets whole scenes, minutes of time play out in wide-shot only. Many times, he'll let the camera linger on a wide-shot, which is fine when there's something compelling in frame, but one too many times Lim's camera lingers on an empty space, if only to let the audience feel the passage of real time or the air in a room. Lim's style is very similar to Yen Tan's Ciao in terms of shots and pacing. Yen Tan is also a Malaysian filmmaker, but Yen Tan doesn't linger as much.

Both Yen Tan's Ciao and Lim's film are essentially chamber pieces. Both take place predominantly in the protagonist's house. Here, it's in the Flanigan family home with only a couple of scenes outside of it. It's also a very quiet film, almost too quiet. There's barely a musical score.

Jefferson Rogers plays Ray, the boyfriend of Steven who comes to visit after Steven decides to stay with Nate who is too grief-stricken to function, or even get out of bed. Ray loves Steven, but his feelings might not be reciprocated as strongly. Ultimately, the climax of the film is Steven's decision to break up with Ray or not.

However, the movie is also about Nate's love life where the death of his last parent opens up Nate to explore being with the person he's always loved, despite that love being a taboo. Before his mother's passing, Nate hesitantly tells her he's not straight. He never says he's gay. He merely lays out that the person he loves does not and will not fit anything traditional.

What proves to be Nate's fatal flaw or his undoing is his obsession with the person he loves. When Nate says he can't live without this person, he literally means it. He's so wrapped up in his love that it's unhealthy. He can't or doesn't want to accept not being with this person. It makes him depressed, and it causes him all kinds of social problems.

At one point, even before his parents die, Steven has to pick up and carry Nate as if he were a baby being taken to his crib. And yes, Nate is very much like a child, like an overgrown baby.

Once it's learned whom Nate secretly loves, it does seem like a doomed romance, doomed because of the taboo nature but also because Nate, like an infant, always wants what he can't or what he shouldn't have. He latches onto something because it's there, not for any substantive reason.

This movie becomes more about those infantile desires, and not about the maturity of dealing with the consequences. At least, this fits with the godless theme underpinning this film because absent the Judeo-Christian idea of consequences, particularly in the afterlife, what might be left is a preponderance of infantile desires. I've seen two other movies in the past decade dealing with this film's same taboo. One of which tried to confront the matter.

This one doesn't. It instead skirts the issue. I commend the filmmaker for being so bold to take on the issue at all, but he then backs away from it. Lim never hits you with it emotionally. He takes us to it after it's already over, teases that it might begin again but then doesn't allow that to happen. Lim even flirts with exposing it through characters like Ray and Trent, played by Garrett Young, but Lim never fully unleashes those characters. He instead remains restrained in his filmmaking and storytelling.

Three Stars out of Five.
Not Rated but for mature audiences.
Running Time: 1 hr. and 24 mins.
Playing Thursday, August 6 at the Rhode Island International Film Festival.
For tickets, go to RIIFF's website.
For more information, go to 'Godless' Facebook page. 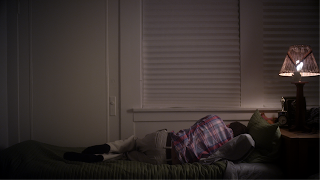 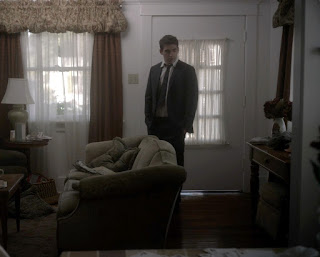 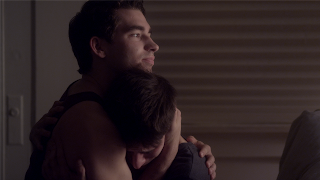