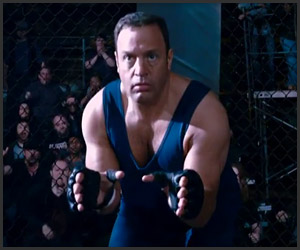 This film had potential in the beginning. Kevin James (Hitch and Paul Blart: Mall Cop) stars as Scott Voss, a biology teacher in Boston. He's awoken by his own snoring. He then rides a motorcycle to work, only to find himself locked out. The idea of a teacher being tardy is funny, but the school's principal is not laughing. Scott reminds Betcher, the principal, played by Greg Germann (Ally McBeal and House of Lies), that he used to be Teacher of the Year. Betcher reminds Scott that that was ten years ago. Instead of doing what he's supposed to do, Scott doesn't seem to care about his class and it appears that this movie might go the way of Bad Teacher (2011).

That potential ends after about ten minutes or so when the movie starts to go into the so-called plot. Betcher announces budget cuts, which will include the music program. Marty Streb, the music teacher, played by Henry Winkler (Happy Days and Arrested Development), will essentially lose his job just before reaching tenure. Despite his age and possibly his wife's age, Marty is having a baby, so Scott needs to raise $48,000 in order to save the music program and Marty's tenure. In order to do so, Scott decides to compete in Mixed Martial Arts or MMA competitions.

It's basically a comedic version of Warrior (2011). Unfortunately, the movie isn't funny and it's certainly not well-written. All the jokes just fall flat and yes most premises are contrived, cliché or even predictable in comedies but this one is doubly so in such dull ways. For the most part, James doesn't do much of anything funny.

Kevin James since his breakthrough has always been a big or slightly overweight guy. As such, a lot of his humor has been derived from that. James has always been good with the pratfalls, which this movie does embrace but in different ways. James' Scott Voss has to get into a MMA ring and basically get his butt-kicked time and time again. Yet, James pulls a great trick. He trained. He lost a lot of fat and put on a good deal of muscle.

James might not make the cover of Men's Health magazine. He might not have six-pack abs or be as ripped as the men he faces in those MMA matches, but he does put himself in great shape, including his arm muscles, which are massive. When he takes his shirt off, he does seem like a formidable opponent. It also looks like James does his own stunts. He seems to take those punches for real.

This could have been Kevin James' version of Rocky (1976). Sadly, James is not as good a writer. The proof is when a hackneyed storyline involving an Asian student named Malia is introduced half-way through that was the height of this movie's lameness and cheesiness. A Dutch immigrant studying his citizenship test is given the worst, if not the stupidest jokes.

James doesn't give his Scott Voss much either. He mainly just reacts to the weird and quirky characters around him. Not much about Scott is relayed. Besides being Teacher of the Year ten years ago and having been a wrestler even longer ago then that, we learn nothing about Scott's history or even recent past.

Scott is a teacher who doesn't care about teaching at the start, but with not much impetus he's going out of his way to help Marty and there's no real explanation as to why. Why was he so lackadaisical at the beginning? What led to him not caring about teaching in the past decade? Was the Teacher of the Year award a lark? Why was he single in his forties? We get nothing, so we have little to grasp here.

One Star out of Five.
Rated PG for rude humor and MMA action.
Running Time: 1 hr. and 44 mins.