DVD Review - To Rome With Love 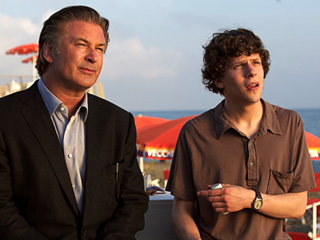 Woody Allen continues his European tour, following his Oscar-winning film Midnight in Paris (2011). This time, Allen sets his movie in Italy's capital city. Instead of focusing on one character as he did with Match Point (2005), or even doing a trio as in Vicky Cristina Barcelona (2008), Allen juggles over a dozen characters in four, separate story lines. It's perhaps too much. One storyline in my opinion could have been dropped entirely.

It seems as if Allen might open his film as he did Midnight in Paris with a bunch of beauty shots of Rome, but he doesn't. He incorporates the city in different ways. One character is an American architect studying in Rome and another gets lost in the city and has to find her way back. Through them, Allen is able to show off the gorgeousness, the richness and the history that is Rome. Like the prologue in a Shakespearean comedy or the overture to an Italian opera, Allen sets the stage with Pierluigi Marchionne, the real-life traffic cop of the Piazza Venezia who only appears twice during the film's bookends. He's kind of a narrator but not really. He could have worked better in the way that Bob Balaban did as the narrator of Moonrise Kingdom.

As many Allen films, his characters have affairs and cheat on their significant others. Not all characters do but some characters do step outside their bounds. Often, it's on a whim. Often, it's on the behest of people in their lives. Yet, it's more about people exploring hidden passions, and, as Allen has been doing with these European films, it's also about people being tourists in other people's lives and like all tourists eventually realizing that time comes to go home.

In fact, the first character we meet after the narrator is an American tourist in Rome named Hayley, played by Alison Pill (Midnight in Paris). She asks for directions from a random Roman who's just strolling down the street named Michelangelo, played by Flavio Parenti (I Am Love). This is the start of their romance, but this romance is only incidental. It only exists to get Hayley's father, Jerry, and, Michelangelo's father, Giancarlo, together.

Woody Allen (Annie Hall) plays Jerry, a retired music producer who specializes in classical music. Fabio Armiliato, the real-life opera singer who debuted at the Metropolitan Opera House, plays Giancarlo, a mortician who is a very simple and humble man. At first, Jerry is very wary of Giancarlo and calls him a communist, but things change once Jerry realizes Giancarlo is probably one of the greatest tenors he's ever heard. Despite having no aspiration to make a career of it, Jerry wants to put Giancarlo's voice to work.

All of this builds to a great visual gag that comes from a hackneyed joke. Somehow, Allen is able to take that hackneyed joke and turn it into this hilarious visual gag. It's simple but Allen makes it work and makes it delightful. Along the way, Allen amuses us with his usual witty one-liners. Of all four story lines, this story involving Allen has the best one-liners and best verbal jokes. Most of them come from Allen's character but a lot also come from Judy Davis who plays Jerry's wife, Phyllis. Judy Davis was nominated for the Oscar for her role in Allen's film Husbands and Wives (1992).

The second storyline and the one that I think is the most disposable is between newlyweds, Antonio and Milly, played respectively by Alessandro Tiberi and Alessandra Mastronardi. They check into a hotel in Rome and prepare to meet Antonio's family. Milly leaves to find a beauty salon and gets lost. Meanwhile, a prostitute named Anna, played by three-time Oscar nominee Penelope Cruz (Vicky Cristina Barcelona), comes to Antonio's room and mistakes him for one of his clients. This leads to more mistaken identities. Milly, on the other hand, wanders onto a movie set and spends time with the movie star Luca Salta, played by Antonio Albanese.

There are some funny moments here and there in this storyline, but, given the mistaken identity elements or the pretenses put up, it doesn't quite rise to the level of Shakespeare's The Comedy of Errors, which might be an unfair comparison. Yet, Allen doesn't do anything further with the conceit that hasn't already been done in a ton of romantic comedies that deal with mistaken identity. The characters don't learn as much. They don't gain as much.

The third storyline centers on a love triangle between an architecture student named Jack, played by Jesse Eisenberg (The Social Network), his girlfriend Sally, played by Greta Gerwig (Greenberg), and her best friend Monica, played by Ellen Page (Juno). All of this would be trite, except Allen uses a great device that makes this light, love triangle more entertaining than it otherwise would have been. Jack meets John, played by Alec Baldwin, and Jack invites John back to his apartment to meet Sally and eventually Monica.

As the love triangle progresses, John becomes the proxy for the audience. A lot of Woody Allen movies involve love triangles and often the people in the audience roll their eyes or quietly denounce or even afterward, outside the theater, complain about the pretenses and the ridiculousness. John gets to be the person in the audience put on the screen to actually denounce these characters to their faces. He's essentially Jack's Jiminy Cricket but who can curse at everyone.

The fourth and final storyline centers on Leopoldo Pisanello, played by Roberto Benigni (Life is Beautiful). He's just a regular man with a boring life, a wife and two kids who for no reason is made into a celebrity. Much like reality TV shows, the mundane details of Leopoldo's life become fodder for the press and those details are viewed as captivating. At first, Leopoldo doesn't like all the attention. He's constantly swarmed by paparazzi like he's Paris Hilton, but after a while he starts to take advantage.

The contrast of Leopoldo's fame despite having no talent as compared to Giancarlo's lack of fame despite having great talent is good to consider without Allen putting them together. The contrast is an obvious one, so Allen didn't need to underline it, but Allen needlessly separates it too. He makes similar contrasts between the artists in Midnight in Paris and makes them more apparent. One could argue he's being subtle here, but it comes off as disjointed. It was still entertaining though.

Four Stars out of Five.
Rated R for some sexual references.
Running Time: 1 hr. and 51 mins.