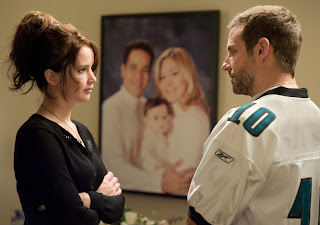 Silver Linings Playbook was nominated for 8 Academy Awards, including Best Picture. The film is notable because it's the 14th film in Oscar history ever to receive recognition in each of the four acting categories. It's the first film to do so in 31 years. Warren Beatty's Reds (1981) was the previous movie that achieved such. Up until then, movies would get nods in all four acting categories every year or so. In 1967, two movies had that distinction Guess Who's Coming to Dinner and Bonnie and Clyde. This film, written and directed by David O. Russell (The Fighter and Three Kings) breaks the 31-year gap.

Russell adapted the 2008 debut novel by Matthew Quick. The title is a strange one. Some people derided the title. There is an explanation in the book, but Russell choose to forgo that explanation. It's a shame because as a cinephile, the explanation goes to my love of movies. Yet, in Russell's movie, his protagonist keeps referring to the title and it just feels hollow and meaningless because we don't know the derivation beyond the hackneyed idiom.

This might be Russell's intention because Bradley Cooper (The Hangover and Wedding Crashers) who stars as Pat Solitano, a recently-released patient from a mental hospital, can't help but come off as crazy every time he mentions the title. Being that Pat is supposed to be bipolar, I guess it works. Unfortunately, I've never thought that highly of Cooper as an actor, but I was hoping that this Oscar-nominated performance would change my mind.

Alas, this isn't the case. In a critical scene where Cooper has to breakdown and cry, I didn't buy it. It felt like him trying to act. It contrasts to Robert De Niro who plays Pat Sr., the father to Cooper's character. De Niro doesn't have to be as loud and manic as Cooper, but even in a fight scene and scenes where De Niro has to be more aggressive or even shed more tears, he handles it way more smoothly and even with more grace than Cooper. The Gurus o' Gold have De Niro at #2 behind Tommy Lee Jones who's nominated for Lincoln (2012), also in the Best Supporting Actor category, but De Niro has my vote.

Jennifer Lawrence (Winter's Bone and The Hunger Games) co-stars as Tiffany Maxwell, a depressed yet sassy widow. Lawrence has already won the Golden Globe and the SAG Award for this role. She seems to be the likely Oscar winner for this performance. There's only one problem. When Tiffany says to Pat that he's the best thing to happen to her, I didn't believe her for one, single second. Yes, this is a romantic comedy with dark tones, but if you don't buy the romance, the whole enterprise is pretty sunk.

Supposedly, the two of them love each other, but why? For nearly the entire two-hour running time of this movie, Pat reiterates that his only motive is to get his ex-wife Nikki back. Tiffany realizes this and knows that in order to get him to spend time with her, she has to use Nikki as bait. Pat's reactions to Tiffany range from confusion, repulsion and fear.

In a scene that could have come from All About Steve (2009), Pat is literally running as fast as he can from Tiffany who chases him down a Philadelphia street. The moment is supposed to be played for laughs, but to me his fear of her seems justified. She basically stalks him. This is not good groundwork to build a romance, and even if I were to accept that she's merely aggressive and nothing truly to be feared, I still don't get why she pursues him at all. He rebuffs her at almost every turn and the only way she gets him to do anything is by manipulating him with the promise he'll get to talk to Nikki. Again, this is not the best groundwork to build a romance.

I realize a lot of this is Russell's attempt to construct what is being called a modern-day, screwball comedy, a genre that was more popular in the 1930s and 1940s. I haven't seen too many films from this genre. Yet, for me, Russell's camera, particularly in the first hour with the lens right in the faces of Pat and Tiffany, make the abrasiveness of the two characters too much for me to bear.

Quick's novel makes various references to movies, including to Rocky (1976). Being the film is set in the same city as that Oscar-winning boxing story, it would have been easy for Russell to include those more explicit references. The closest overt reference is the visual of Pat running through some Philadelphia streets, almost to mimic the infamous Sylvester Stallone montage. Like Bradley Cooper and his character, I was born in the City of Brotherly Love, so I appreciate how, for a brief moment, Russell made Philly romantic. The dance choreography was also a bit of a fun oasis in this awkward and lopsided duality.

Two Stars out of Five.
Rated R for language, some sexual content and nudity.
Running Time: 2 hrs. and 2 mins.