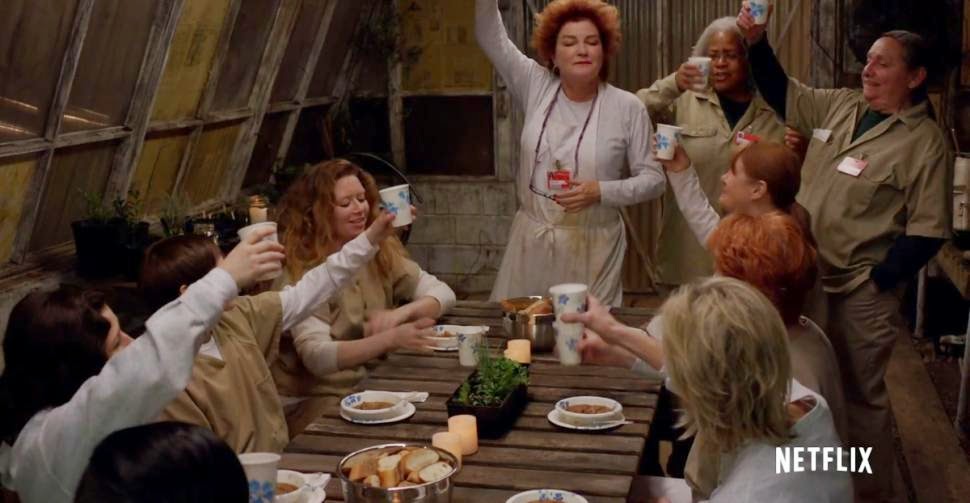 This is one of the best TV shows available right now. It's basically the mostly female, mostly comedic version of HBO's Oz. Yet, this series doesn't revel in the murder and the mayhem that the HBO series did. Its structure is certainly different than Oz. If anything, it's more akin to Lost, which was also an ensemble piece that had an A-plot that was buttressed by flashbacks interspersed within. The flashbacks in one episode typically focused on one character that often informed the character's present-day behavior or actions.

There are 13 episodes in Season 2. With the exception of the final episode, each has flashbacks centering on one inmate in this New York prison. The list of those characters in the order they appear is Piper, Taystee, Crazy Eyes, Lorna, Gloria, Poussey, Cindy, Rosa, Red, Piper again, Jane and Vee. Each flashback provides such richness, such texture and such insight. Each is often more integral or informative than the flashbacks on Lost. Often, each is simply fun, funny or even exciting.

Piper, played by Taylor Schilling, is taken to Chicago from Litchfield prison. The flashbacks are about prepubescent Piper learning of her father's affair and how she always does the right thing and tells the truth. She learns from her former girlfriend Alex Vause, played by Laura Prepon, that they're in Chicago to testify against the drug lord for whom they used to work. The question is if they'll tell the truth on the stand or not.

Taystee, played by Danielle Brooks, competes at a job fair that is organized at Litchfield. The flashbacks reveal how she was basically adopted by a woman nicknamed Vee who supports herself by selling drugs. Because Taystee is good with math, Vee decides to employ her. Vee has also adopted a young man named RJ, played by Eric D. Hill. RJ sells for Vee and he becomes like a brother to Taystee.

Episode 3 - "Hugs Can Be Deceiving"

Suzanne aka Crazy Eyes, played by Uzo Aduba, is excluded from playing charades by the other black girls. The flashbacks reveal how she was adopted by a white family and how she tried to be friends with other white children, but was shunned by them too. Yet, all that changes once Vee arrives as a returning inmate to Litchfield and Vee embraces Crazy Eyes like no one else ever has.

Lorna Morello, played by Yael Stone, is the driver of the police van that takes Rosa to a hospital outside Litchfield where Rosa can receive her chemotherapy to treat her ovarian cancer. The flashbacks reveal the true nature of Lorna's relationship to Christopher, the man she loves. Lorna drives the police van with officer Fischer, a security guard, played by Lauren Lapkus, but Lorna sees an opportunity and steals the van to visit Christopher.

Gloria, played by Selenis Leyva, runs the Litchfield kitchen after Red was kicked out. She works there with all the other Hispanic girls. They also have their own showers, which get flooded with brown water. As a result, they try to use the showers which the black girls normally use. This causes friction. Vee steps up as the leader of the black girls and takes control of the situation. Red warns Gloria that Vee is a manipulator, not to be trusted. The flashbacks reveal the abusive relationship Gloria had with Arturo right before her incarceration.

It's Valentine's Day at Litchfield and Poussey, played by Samira Wiley, is secretly in love with Taystee who isn't a lesbian. Poussey is distrustful of Vee because of the negative influence Vee has on Taystee. The flashbacks reveal a negative influence on a German girl whom Poussey also liked when she was a military brat traveling with her father.

Cindy, played by Adrienne C. Moore, waivers on being committed to Vee's cigarette and drug smuggling business. The flashbacks reveal her lack of commitment to her TSA airport job or to that of motherhood and her daughter.

Rosa, played by Barbara Rosenblat, is told chemotherapy isn't working. The prison won't pay for surgery, so she only has a few weeks left to live. The flashbacks reveal her life as a bank robber and how she believed she was cursed, possibly with the kiss of death, as two fellow bank robbers whom she kissed, Marco and Adam, both died on her. The last boyfriend / bank robber Donnie survived because she didn't kiss him. She plans another robbery but fears her curse might hurt someone else, namely Yusef, a young boy with cancer, played by Ben Konigsberg.

Red, played by Kate Mulgrew, asks Piper to visit her restaurant in Queens during the furlough. Red has in the meantime started yet another smuggling operation using the abandoned, Litchfield greenhouse. The flashbacks reveal how Red and Vee first met.

Piper returns from furlough but gets a letter from Alex. The flashbacks reveal Piper learning that Alex was cheating on her girlfriend with Piper.

Episode 11 - "Take a Break from Your Values"

Sister Jane, a former nun, played by Beth Fowler, reluctantly joins a hunger strike organized by new and annoying inmate Brook Soso, played by Kimiko Glenn. The flashbacks reveal that Jane's intentions when it comes to protesting or social activism might not be selfless.

A rain storm floods the prison, ruining the plumbing and causing a power outage. The inmates are forced to all gather and camp in the cafeteria. This raises tensions between Vee, played by Lorraine Touissant and Red who are virtually at war. The flashbacks reveal what Vee does to people who cross her and the results are deadly.

Some people try to tell the truth but are stopped. Many of the girls and guys work together to save a fellow inmate, while getting rid of several others.

There are plenty of story lines and plot points, as well as character developments that haven't been mentioned here. Every actor though gets a moment to shine and be memorable. Even characters who only appear for one episode like everyone in "Thirsty Bird," even they shine and are memorable. For example, Lolly, played by Lori Petty, is terrific. Rounding out the cast are Natasha Lyonne, Dascha Polanco, Matt McGorry, Maria Dizzia, Taryn Manning, Lea DeLaria, Michael Harney, Nick Sandow and Alysia Reiner as Natalie Figueroa, the assistant warden. All of whom are nothing short of fantastic.