Matt Riddlehoover continues on his path of being the gay Woody Allen, not in real-life but cinematically. His writing and directing are very much akin to the Oscar-winning filmmaker whose focus leaned toward the male ego and its concerns about intimacy and monogamy, commitment and artistry. This latest movie from Riddlehoover is little different. Occasionally, Allen would veer into the absurd. The Purple Rose of Cairo and Midnight in Paris both incorporated some fantastical or supernatural element, a gimmick as it were, but that gimmick was always to underscore a larger point. If Riddlehoover is doing the same, I struggle to see it, or else he could just be having a romp. He might not have a larger point on his mind. He could just be having fun with a silly premise.

Jacob York stars as Greg, a 31-year-old, web designer in Nashville, Tennessee. He dropped out of medical school after having what could be considered a quarter-life crisis resulting in the break-up of him and his boyfriend Alex, played by Rafael Sochakov. He's neurotic in almost the typical way that most Woody Allen-protagonists are. His chief neuroses seem centered around his weight and the idea of becoming a parent.

Charlie David co-stars as Ken, the partner of Greg for four years. Ken is a lawyer who seems like a normal, everyday guy. He doesn't have the neurotic tendencies that Greg has. He has no body issues and he'd like to have children some day, perhaps even some day soon.

On the night of their fourth anniversary, Greg and Ken cancel dinner plans to babysit Greg's nephew at Greg's sister's house. The child is put to bed and the two guys get randy on the couch. Some time later, Greg starts exhibiting all the usual signs of a woman in her first trimester of pregnancy. Greg and Ken go to the hospital where they're told that Greg actually is pregnant.

It's then immediately revealed that men, particularly gay men, are now able to become pregnant, carry a baby to full term and then give birth. A reference is made to Thomas Beatie, the Hawaiian citizen who in real-life is credited as the first man to become pregnant and give birth. Beatie is transgendered. He was born female but became male, yet still retained his female reproductive organs. 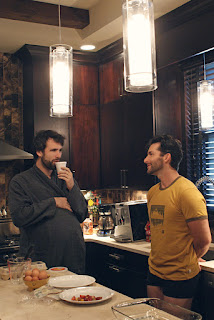 However, this movie states this is not the situation for Greg and these other men. It's not explained scientifically or even attempted to be explained scientifically like Arnold Schwarzenegger in Junior. It's basically written off as a miracle. That being said, it's probably best not to think about the specifics too much, especially since the birth for these men occurs through the anus.

The movie makes a point to comment briefly on legislation as well as the politics of "paternity leave." In reality, the Family and Medical Leave Act of 1993 is a federal law that allows workers to get job-protected, time off. Various workers can get this time off, but principally it was for pregnant women for what's generally called "maternity leave." Men can use it, but often they don't, and when men do use it, they usually don't get the same amount of time.

One person in this movie scoffs that paternity leave is less than maternity leave, seeing it as being perhaps unfair to men. If that's the supposition, then it's debatable.

An article in The New York Times by Ron Lieber reports on tech companies like Netflix and Microsoft that are increasing the amount of parental leave given to employees. The article also talks about the benefits of giving increased, if not equal time to new fathers. The article makes an argument for the economic benefits to the company, long-term, by looking at the psychological and physiological effects on women and children as a result of increased paternity leave.

Unfortunately, this film doesn't delve into any of that. Riddlehoover's movie doesn't tackle the issue in a substantive way. It's merely a drama about whether or not Greg and Ken even want to have a baby at all, as well as a comedy of dealing with that through the quirk of two gay men handling an accidental pregnancy between themselves. The problem is that I don't know what this is supposed to say about gay men and fatherhood that isn't obvious or reductive toward women.

Some critics, such as Jonathan Pinkerton and Timothy Rawles, have compared the film to Joan Rivers' Rabbit Test. That movie was more of a farce that Riddlehoover's movie, which is more down-to-earth. Yet, there is comedy.

Some might find it funny to see Greg acting like a woman. It's worked in comedies since Some Like It Hot (1959) and Tyler Perry's Diary of a Mad Black Woman (2005). The difference here is that York isn't in drag. Yet, he is. The pregnancy belly is very much in drag. If nothing else, at least it's rather unique. Most men in drag take on the superficial aspects of being a woman, not the internal aspects. The exception was Robin Williams joking about hot flashes in Mrs. Doubtfire. York though is more subtle.

Besides York hobbling around with an extended stomach, he's given pretty hilarious one-liners. Most of which are references to gay culture, or rather pop culture appropriated by gay men. You could probably make a checklist of all the predictable references, and you probably wouldn't be too far off. Does he reference Golden Girls? Yes. Does he reference Madonna? Yes.

However, there is some comedy outside of those references that are random but laughable. This includes the funny shots of animals, particularly a chicken and a cat. York's asides to his pet did garner a lot of giggles.

Chris Salvatore plays Thomas, a doula or a birthing coach who comes to help Greg get through this pregnancy. Salvatore continues to be sweet and charming, and this film again provides him the opportunity to showcase his amazing abilities as a singer-songwriter. I almost wish the characters of Alex and Thomas were combined into one and played by Salvatore, though I did like how Riddlehoover didn't go the obvious route of having something romantic between Greg and Thomas.

Three Stars out of Five.
Not Rated but for mature audiences.
Running Time: 1 hr. and 25 mins.