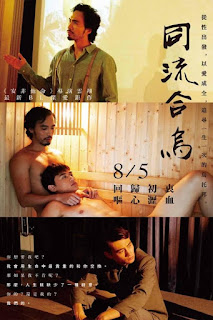 Scud is a writer-director-producer from Hong Kong who only goes by one name. This is his sixth feature, which he made in tribute to three, gay filmmakers. The first is Mishima Yukio, the Japanese auteur who committed suicide. The next is Rainer Werner Fassbinder, the German avant-garde artist and the last is Derek Jarman, the British provocateur. Scud's tribute to them is sometimes verbal references in dialogue. Some times, it's visual reflections. Other times, it's thematic echoes. There's nudity, homo-eroticism, and sexual liberation to the max, but the movie is mostly about self-acceptance, acceptance of others, pluralistic love, poly-amorous relationships, free and nonjudgmental sex, as well as the spread of these ideas from one generation to another in order to build a more uninhibited and empathetic society.

The opening scene of this film makes Fifty Shades of Grey or even its sequel look like Mary Poppins. It goes from an alluring, blue hallway to a red room that Christian Grey would blush over. There's a naked, Asian, Jesus-Christ-on-the-cross, BDSM fantasy that has a woman with her face covered as the dominant. It then goes to guy-on-guy, skin-to-skin contact. Immediately, one is presented with full-frontal, male nudity, which is less and less shocking the more of it that's seen and it's seen quite constantly in this film. Alain Guiraudie's Stranger By the Lake is probably the only other recent, theatrical film with more consistent, full-frontal, male nudity.

Adonis He Fei stars as Hins Gao, a college student in his final year who is thinking about what he's going to do with the rest of his life. He works as a bartender. He doesn't have any better job prospects. He lives with his widowed mother but he spends most of his time with his religious girlfriend, Joey, played by Fiona Wang. Everything changes for him when he meets his new professor who guest lectures his Cultural Studies class. 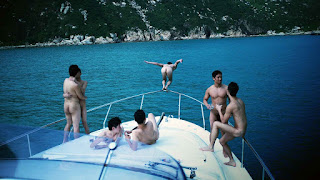 Jackie Chow co-stars as Antonio Ming, the aforementioned professor who is visiting from Australia National University. Antonio is an expert scholar in Ancient Greek culture and what's called "Utopian Thought." He shocks his class in the first minute by showing a large, pornographic photo and by asking who in the room is gay. Antonio then comes out as gay right then and there. He further engages his students to let go of any homophobia by quoting Pope Francis.

It's a brilliant introductory scene for Antonio. It would have been more brilliant, if I hadn't seen practically the exact, same scene in the Christmas Special of Sense8 last year. This film premiered early 2016 before the Sense8 Christmas Special, so technically Scud came up with this idea first, but more people, including myself, saw the Wachowskis' version ahead of Scud's. The Wachowskis are queer filmmakers too, so it's interesting to see both them and Scud making bold proclamations of homosexuality and even orgiastic depictions that blur the line and further the idea of fluidity in sexual preference. In one scene, Scud shoots a foursome in which you can't tell who is having intercourse with whom. It's just limbs on headless bodies. It could be any combination of heterosexual and homosexual, and it doesn't matter.

Antonio notices Hins has the book by Yukio Mishima, Confessions of a Mask, which is Mishima's semi-autobiographical novel in 1949 about a secretly gay, Japanese boy. Hins is the veritable boy identifying with that book. He's having thoughts, which aren't necessarily about sex but that are about fantasizing about nude bodies, particularly male, nude bodies. Hins then questions if he's gay himself, despite still loving his girlfriend. His girlfriend discovers this and also questions it. Antonio's assistant, a woman named Swan, played by Moe Chin, along with Antonio try to convince that Hins' potential bisexuality is okay and he shouldn't fight it.

Scud gives us clever sequences that provide insight into Hins' thoughts and desires. Scud crafts these really good, circular moves in which the camera will walk through a scene doing a 360-degree spin. He does so three times. The first is the BDSM opener that hints at Hins' bisexuality. It sets the stage for the showier scene in a coffee shop, which imagines a room full of people totally naked in wide-shot going about their coffee and conversation unaware of their own nudity, but as the camera moves past and around them, the nakedness goes away and in one, continuous shot magically they're all clothed. 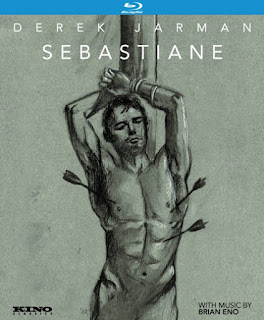 The third, fantasy sequence is in homage to Derek Jarman's Sebastiane (1976), the British film, which turns the story of Saint Sebastian into soft-core, gay erotica. In Scud's re-creation, Antonio Ming is stripped bare and tied to a tree, while a male, sexual partner shoots arrows into his body. It's again a long, continuous shot, done realistically and with the effect that convinces you Antonio's body is actually being penetrated with real arrows. It's scary yet sexy.

Filmmakers like Jarman are at the top of Scud's mind, but I detected whiffs of a filmmaker like Frank Ripploh who did Taxi Zum Klo (1980), a movie that also had no qualms with full-frontal, male nudity and unsimulated sex in film. Ripploh was also about pushing boundaries about preconceptions of same-sex attraction or gay people. A scene here where a man exposes himself to a child feels provocative in ways that Ripploh only toyed with in Taxi Zum Klo.

This primes the movie as it veers into the political by the end. It comments on an unfair law in Hong Kong that has the age of consent for gay people be 21, whereas the age of consent for straight people is 16. The movie doesn't really critique the law. Scud is rather nonchalant about it by merely coming up with a story that circumvents it. That story is very melodramatic and seems like it was ripped from a Fassbinder film, but presented here as a deus ex machina to arrive at an upbeat ending. It seemed contrived rather than authentic, but it's appreciated for at least shining a light on an unfair law in that Asian country.

Not Rated but is very sexually explicit.
Running Time: 1 hr. and 28 mins. 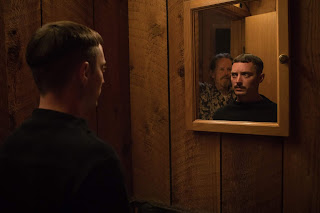