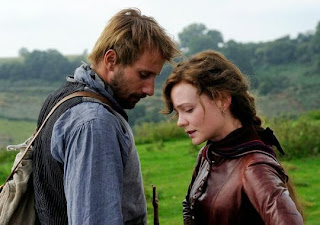 Carey Mulligan (An Education and The Great Gatsby) stars as Bathsheba Everdene, a young woman living in Dorset, England, in the year 1870. When her uncle dies, she inherits his farm and she has to be the one to manage it, as well as manage the dozen or more people who work there. At first, the movie seems like it's going to be the story of how this woman overcomes whatever adversity or sexism or prejudice otherwise, as she takes this unlikely leadership position and power role. It's briefly that, but the film is more a romance where Bathsheba has to decide or cycle through three, potential suitors.

Matthias Schoenaerts (Bullhead and Rust and Bone) co-stars as Gabriel Oak, a very skilled shepherd. He first meets Bathsheba before her inheritance. He clearly is hit with love at first sight. Either that, or his lack of options makes him want to snatch up the first beautiful woman he can. With very little interaction or getting to know her at all, he proposes marriage to Bathsheba. Yet, he seems absolutely genuine and sincere.

Michael Sheen (The Queen and Frost/Nixon) plays William Boldwood, an older man who perhaps fancies Bathsheba when they first meet as she's engaging in some tough negotiation, battling some possible sexism. He doesn't make much of it. It's only when she sends him a Valentine's Day card does he develop feelings for her and starts to pursue her, doing so probably out of loneliness or desperation then actual affection. Yet, he seems absolutely genuine and sincere too.

Despite those two great options, both of whom propose marriage, Bathsheba turns them both down. She claims to be too independent and not to need a husband. Therefore, it's extremely odd when a third man comes along named Francis Troy, played by Tom Sturridge (Pirate Radio and On the Road), and she then inexplicably marries him. The reason she briefly gives later feels incredulous. In the moment, it seems as if she marries Troy merely out of lust. A scene of swordplay doubling for foreplay seems to be the deal-maker, yet almost immediately after she rejects the assumption of sexual awakening and instead says she married Troy out of pity.

It's during this section that the film becomes tedious. Based on the novel by Thomas Hardy, this film, written by David Nicholls and directed by Thomas Vinterberg, can't help but make things so obvious in how it's going to end for Bathsheba and Troy. It was painstakingly clear that her rushed and ill-conceived marriage to Troy wasn't going to last. Troy is immediately painted with a villain brush or painted as a jerk who will inevitably be dispatched. He wasn't given much of a fighting chance. This made the film boring.

The really apparent chemistry between Mulligan and Schoenaerts can't be denied and the circling dance between Bathsheba and Gabriel Oak was too on-the-nose that even someone who never read the book or seen any of the other many adaptations would be checking his or her watch wondering why is it taking so long for Bathsheba and Gabriel to get together. It all feels too drawn out and way too long a film.

Two Stars out of Five.
Rated PG-13 for some sexuality and violence.
Running Time: 1 hr. and 59 mins.