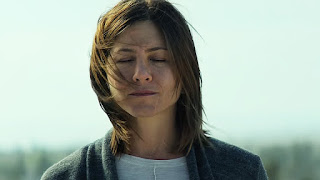 Despite starring Jennifer Aniston, this was one of the most under-marketed films of the past year featuring such a high-profile actress. This movie had the potential of being for Aniston what Dallas Buyers Club was for Matthew McConaughey. Because this film only got a limited theatrical release, certainly not as wide a release as Dallas Buyers Club, it got buried underneath all of the other movies that were vying for attention. Thanks to the campaign of screeners, it did get three major nominations. All of them were for Jennifer Aniston. It got a Golden Globe nomination, a SAG Award nomination and a Critics Choice Award nom as well.

It had such momentum with these considerations that some thought Aniston might get an Oscar nomination. Yet, she seemingly was pushed aside, but Aniston does give a great performance. Aniston stars as Claire, a woman who used to be a lawyer, who used to be a wife and who used to be a mother. She lost it all in some kind of incident that left her forever scarred and barely able to walk. She's also in chronic pain and from beginning to end Aniston convincingly portrays that pain. I believed that she was really hurting physically.

Therefore, as a vehicle for Aniston to showcase her dramatic acting, it's a success. Director Daniel Barnz perfectly captures her and gives her the space to display this woman's suffering. The story that the narrative follows feels contrived. Claire is in a support group that has had a recent suicide, so Claire decides to stalk the husband and little boy of the dead woman, ultimately she befriends him, but the whole thing is so contrived.

Adriana Barraza co-stars as Silvana, the Hispanic woman who works for Claire. There is a great relationship between the two, which is vastly more interesting than any interaction that Claire has with any guy. The two main guys are interesting though. Chris Messina is great, even in his one scene, and this is probably only the second time I've liked Sam Worthington in a role. The other time was The Debt (2011).