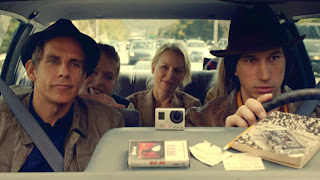 The 5th season of FX's Louie premiered on April 9. In the third episode, Louie CK has a scene where Louie's character who is in his 40's has a conversation with a young woman in her 20's. In that conversation, Louie has some old school ideas about how people, especially people in a certain profession should behave, whereas the younger person has different ideas, ideas that the older person finds disrespectful or disingenuous or just plain rude. The argument of the younger person is that her different ideas aren't necessarily wrong and in fact are more in line with the times and perhaps are more economical or efficient. This film is basically that Louie CK conversation expanded into a feature-length story. This film, written and directed by Noah Baumbach, was conceived and released first. This film went into limited release on March 27, but I saw it after the Louie episode, so my interpretation and ingestion of it was a bit colored.

What Louie CK does that Baumbach doesn't is yield to the younger person. Louie's character tries to push back against the young person but eventually surrenders or gives up. Here, Baumbach's protagonist doesn't just roll over. He does fight the younger person. This made me appreciate the film a lot more because I was turned off by the episode of Louie. In that episode, the younger person does land on a reasonable argument, but there is an undercurrent of smugness and arrogance that I didn't like.

In Louie, the young person argues that because she's successful in what she does, then that makes what she does right, or in the least something that should be praised. Agreeably, there is a point to be made about letting go of certain old school or old world standards or judgments. This film by Baumbach does make more of a battle out of it, but this movie does land more on the side of the older characters. Maybe it's because of my current age, but I too side with the older characters.

I understand the allure of the young people and their energy. I understand the jealousy, but almost immediately I saw how wrong-headed the allure was and I almost immediately rejected these young people, unconsciously echoing my rejection of the Louie CK episode. Yet, Baumbach crafts a great journey for his protagonist that is perhaps the funniest journey he has ever put to screen, outside his work on the animated film The Fantastic Mr. Fox.

Ben Stiller (There's Something About Mary and Night at the Museum) stars as Josh, a documentary filmmaker who is 44 and lives in New York. He's been working on a movie for eight years. He's sustained with grant money but he's run out of funds and his cinematographer-editor is reaching his limit, so Josh is under pressure to finish. He's very smart, an intellectual in fact. He's sweet and compassionate, but he doesn't feel as generous as he might like.

Adam Driver (Frances Ha and This Is Where I Leave You) plays Jamie, a fellow documentary filmmaker who is a bit younger. He's probably in his late twenties, maybe early thirties. He's in a relationship with Darby, played by Amanda Seyfried (Mamma Mia! and Les Misérables). Both Jamie and Darby are like hipsters. Instead of modern technology, they embrace things from a generation or more ago. Josh uses his MP3 player and his smart phone constantly, whereas Jamie has a collection of vinyl records. Jamie and Darby revel in anachronisms or more earthy and hippie-dippie things.

Oscar-nominee Naomi Watts (The Impossible and 21 Grams) co-stars as Cornelia, the wife of Josh who befriends Jamie and Darby and becomes rather taken or infatuated with the youngsters. She works as a film producer. Her father is a famous documentary filmmaker too, but she's dealing with issues of not being able to have a baby, due to miscarriages, while all her friends do have babies. Being around Jamie and Darby who don't have a baby and who aren't constantly throwing it in her face is refreshing to her.

The movie turns and becomes all about the morals and ethics of documentary filmmaking. Josh has a way of making documentaries, which comes into conflict with Jamie's way of making docs. Jamie's way employs lies and manipulations. It's actually not that far flung from criticisms of reality TV as it stands now. It's not that far flung from the controversy and argument surrounding Catfish (2010) and Exit Through the Gift Shop (2010). Even Michael Moore's Bowling for Columbine (2002) received similar criticisms.

Josh, speaking for Baumbach, does make a great rant against the Internet generation and its need to take pictures or shoot video constantly of everything they do, but, as was just pointed out with the maker of Kurt Cobain: Montage of Heck, that kind of thing can be a documentary filmmaker's dream. Yet, Baumbach doesn't totally condemn that generation nor does he Jamie. By the end, he still can't help but mock it.