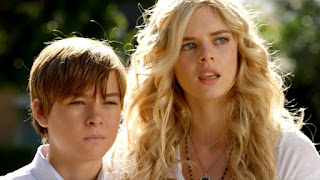 McG started out doing music videos. He became known briefly as a director of action comedies. He moved into producing television. He was involved for the better part of a decade on CW's Supernatural, which has a lot of horror-comedy elements to it. This movie seems to be out of that school and could totally be an episode in that series, but an episode that leans more on the campy side. It could also be an episode of Buffy, the Vampire Slayer as well and the movie perhaps should be judged in the same, campy and meta-comedic manner.

This movie premiered on Friday the 13th and falls in line with a lot of TV specials leading up to Halloween. However, the comparable feature films seem to be Tucker and Dale Vs. Evil (2011), The Cabin in the Woods (2012) and Scouts Guide to the Zombie Apocalypse (2015). There's a lot of gore that's played for laughs. There's a lot of playing with teenage stereotypes, mocking them in a way, not subverting those stereotypes but taking them to their extremes. Like with Scouts Guide to the Zombie Apocalypse, or even the more recent Stranger Things or It, it centers around a prepubescent boy facing demonic forces. Thankfully, this movie doesn't feed into the 1980's nostalgia trend of those aforementioned properties, yet there is a character who constantly wears a headband here.

Judah Lewis (Demolition and Game of Silence) stars as Cole Johnson, a 12-year-old boy who is shy and a bit of a nerd. He has a strong interest in science-fiction. He also aspires to be a police officer. He has a very preppie look. He dresses like an accountant, despite only being in middle school. His main problem is his fears and anxieties over things. He's not a complete, scaredy cat, but there are things that make him extremely nervous, though his fears aren't totally unjustified. We see him react to needles and spiders, which many people fear. The more ridiculous is his anxiety over learning to drive, which the movie never really develops all that well. In other words, Cole's fears are normal. They don't seem as unusual as the movie initially establishes or tries to establish.

Samara Weaving co-stars as Bee, a college-age girl who works as the babysitter for Cole. Due to Cole's fears, his parents still employ a babysitter to watch over Cole when they go away for evenings or for the entire weekend. She is a super sexy blonde who is the absolute dream girl for Cole. She seems perfect for Cole in every way, aside from the age-difference. Later, however, she's revealed to be more like the protagonist in Mad Men.

Robbie Amell (The X-Files and The Flash) plays Max, the quarterback who plays football but his real sport might be more akin to Patrick Bateman's.

Bella Thorne, a Disney Channel star who worked with Amell in The DUFF, plays Allison, the cheerleader who cares more about her breasts than anything else but who secretly wants to be a journalist.

Hana Mae Lee (Pitch Perfect and Jem and the Holograms) plays Sonya, the sadist and a bit of a goth girl who carries around a knife.

Andrew Bachelor (Resident Advisors and The Mindy Project) plays John, the comical black guy who is basically doing his shtick from his social media sites. 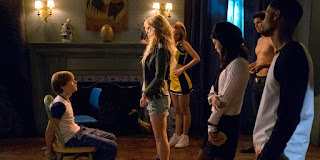 All these characters are stereotypes that this movie, written by Brian Duffield (Insurgent and Jane Got a Gun) has fun twisting. It accelerates into insanity quickly and maintains a fairly good pace once it gets going. For the most part, its starts out as smart. It pulls some things that feel illogical, if only to keep the suspense going, but things are so bonkers and so fast-paced that any illogical moments can be overlooked. In many ways, this film is a companion piece to Adam Wingard's The Guest (2014).