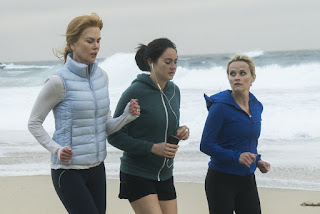 Hulu's The Handmaid's Tale won Outstanding Drama Series at the 69th Emmy Awards. From the Women's March after President Trump's inauguration to the #MeToo campaign that came in the wake of the Harvey Weinstein scandal, The Handmaid's Tale was the perfect TV series of 2017. The emphasis on issues concerning women and stories centering on women became very important this past year. Big Little Lies also won big at the Emmys. That HBO series focused on four women and similar issues as #MeToo and worse. Even Alexander Skarsgård, when he won for that show, said he felt like one of the girls. Lena Waithe won the Emmy for Outstanding Writing for a Comedy Series, the first black woman to do so, and the first black, gay woman to do so.

Donald Glover won the Emmy for Outstanding Directing for a Comedy Series, the first black person to do so. Other black people have been nominated in that category like Paris Barclay or Millicent Shelton. Aziz Ansari was even nominated last year. Sterling K. Brown won Outstanding Lead Actor in a Drama Series for NBC's This Is Us. Rami Malek who is of Egyptian-descent won last year, but the last black man to win was nearly 20 years ago when Andre Braugher won for another NBC series Homicide: Life on the Street. Brown name-checked Braugher in his speech.

RuPaul Charles won for Outstanding Host for a Reality-Competition Program, the first black person to win in that category, though the category was first created for the 60th Emmys. Black Mirror won Outstanding Television Movie for its episode "San Junipero," which was about an interracial, lesbian romance, starring Gugu Mbatha-Raw and Mackenzie Davis. Riz Ahmed won Outstanding Actor in a Lead Series, becoming the first Muslim and first person of South Asian-descent to win in that category and the first to win for a lead acting category. He was the star of HBO's The Night Of. It should be noted that Archie Panjabi of CBS' The Good Wife is also of South Asian-descent. She won an Emmy in a different category several years ago. Ansari is Muslim and he won in other categories this year, so the winners certainly show plenty of diversity on TV. 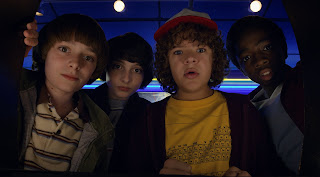 Ansari won for his Netflix series Master of None. It would take too long to talk about the bombardment of content from Netflix. There were the big things like Stranger Things 2, American Vandal, The Crown, 13 Reasons Why, BoJack Horseman and the various comedy specials. Netflix still dominated, while Amazon Prime got drowned out of the streaming video conversation.

NBC's Will & Grace returned after a 11-year break. HBO's Curb Your Enthusiasm returned after a 6-year break. Yet, both were eclipsed by Showtime's resurrection of Twin Peaks, which had been gone for over 20 years. CBS All Access put Star Trek: Discovery on the air and then online exclusively. It became the first Star Trek series after the last one ended 12 years ago. Obviously, there have been the feature films as recently as last year, but weirdly, FOX beat CBS to the punch with its comedic homage to Star Trek called The Orville.

Other new TV shows include three series that were all about special military units in overseas missions. NBC's The Brave and CBS' SEAL Team were procedural shows that didn't really dig into their characters or examine the inherent jingoism of it all, at least not in the first few episodes I watched. CW's Valor was more engaging as a character study that didn't become too soap operatic with his serialized storytelling. All those shows are doing well, but they weren't the huge hits as ABC's The Good Doctor or CBS' Young Sheldon, two shows about young white savants, one who's definitely autistic and the other seemingly so. 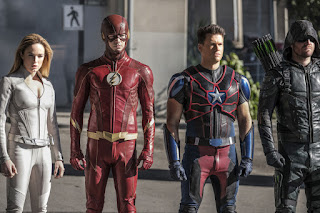 Several new TV shows premiered about super-heroes or people with special abilities. This is on top of the slate already on the CW. There was Legion on FX. We got another X-Men inspired series, The Gifted on FOX. Hulu had Runaways, which apparently exists in the same Marvel Cinematic Universe that's burning up the box office. However, the slate on the CW, headed by writer-producer Greg Berlanti, shouldn't be dismissed. In fact, what the Berlanti-verse is doing is arguably better than the fare at the box office. Berlanti is currently the king of the crossovers and this year his team put together "Crisis on Earth-X," a crossover of four, super-hero TV shows that was certainly better than the Justice League (2017) blockbuster.

That's about the past year in a nutshell, so here's the list of my favorite TV shows of 2017.

Special shout-out to Hollyoaks (E4), the British TV series dragged out the #WhoKilledAmy story for a long time but yielded great drama and twists with its actors, including Kieron Richardson as Ste, Parry Glasspool as Harry, Duncan James as Ryan, Gregory Finnegan as James, Nick Pickard as Tony and Ashley Slanina-Davies as Amy.