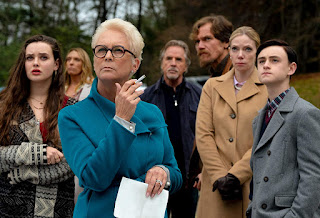 Two references exist in this film. The first reference is Clue (1985), a farcical murder mystery. The set-up here seems to be akin to that board-game adaptation with an ensemble of eccentric characters. However, the second reference is Murder, She Wrote (1984). The protagonist and ultimately the ending feel really ripped from that 1984 series centering around an elderly female sleuth. The film, written and directed by Rian Johnson (Star Wars: Episode VIII - The Last Jedi and Looper), doesn't have an elderly female sleuth. Its sleuth is instead a quirky middle-aged man. It does have a Clue-like ensemble. As both Clue and Murder, She Wrote, it doesn't completely work. As either, it's not as satisfying. There are some funny performances and some good comedic bits throughout, but, as a murder mystery, I was underwhelmed. The film thinks it's more clever than it is and at the same time I don't think it does as much justice by its characters as it should.

The film introduces us to an entire family, but introductions to them is the most we get. Each family member is nothing but a caricature, either to be mocked or dismissed. They are the products of wealth and privilege who are not worthy of any kind of empathy or sympathy. It's not that dissimilar with how the characters were in Clue. None of them were really worthy of empathy or sympathy, but Jonathan Lynn's cult classic spent more time with them and gave them more scenes where they're interacting and bouncing off each other. That amount of time builds natural empathy or sympathy as just a consequence. Johnson's film doesn't have that amount of time with the family to build any kind of connection like that. The family members are so disposable. It doesn't make the ending that literally disposes of them all that effective. 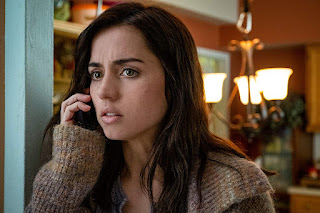 Ana de Armas (Blade Runner 2049 and Knock Knock) stars as Marta Cabrera, the nurse and companion to a successful and extremely wealthy, mystery writer. She's Latina, but it's a running joke that the family of her employer doesn't know which country is her heritage. They keep guessing different countries from Ecuador to Brazil. It's a funny joke that exposes really all one needs to know about her relationship to them, but the fact that the film never identifies what her heritage is specifically doesn't aide in the audience's empathy for Marta. Even though she's not a member of the main family who are a main part of the narrative, she is the protagonist and the amount of time we spend with her is barely enough to endear the audience to her. Yet, it's still not enough to give me a fuller or more complete picture of who she is.

She has a family, a single mother and a sibling. It's never explained where her father is or why he's not in the picture. It is revealed later that her mother is an undocumented immigrant. Her mother's status becomes a plot point, but it's clear that immigration is an idea or issue that is atop Johnson's mind. Yet, it is just a plot point.

The film runs through six members of the family in the center of this narrative. We're given their names and a bit for them to play, but that's it. The casting is fine, but we blow past them so fast that mentioning them at all almost feels pointless. They are all apart of the Thrombey family. The patriarch of which is Harlan Thrombey, played by Christopher Plummer (Beginners and All the Money in the World). He's the one who is found dead and it's his death that has to be solved. His family members are all positioned as suspects. A couple of them are teed up with motives, but it ends up being all for nothing, again as all are just dismissed. 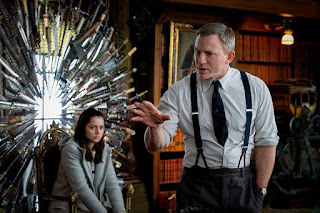 Daniel Craig (Skyfall and Logan Lucky) co-stars as Benoit Blanc, a private detective who is a consultant for the local police department. He's supposed to be the Jessica Fletcher or the Sherlock Holmes of this film. His name would make him seem more like a character from an Agatha Christie story. Her signature sleuth was Hercule Poirot, a French name just like Benoit's name. Yet, instead of having a French accent, Benoit has an accent from the American south, or Bluegrass country like Kentucky. As just a funny investigator, he's entertaining in this narrative. As the one delivering the exposition that eventually explains everything, he's fine. Yet, we don't get much insight into who he is as a person either. He's just an exposition machine.