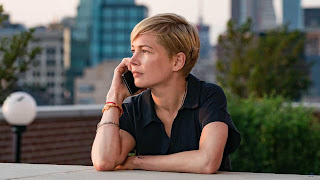 This film is a remake of Efter brylluppet (2006), which was directed by Susanne Bier and was nominated for Best Foreign Language Film at the 79th Academy Awards. The 2006 film from Denmark was highly acclaimed. I saw it nearly 15 years ago when it was released. It starred highly acclaimed actor Mads Mikkelsen and I remember enjoying it. However, I couldn't recall what the plot of the film was, so I went into this film somewhat cold. In general, I don't like when international films are remade by and for Americans. The original film is usually stronger. It's rare that a remake will be as good as the original or even come close. The only such remake that I would argue is as good and possibly better was David Fincher's The Girl With the Dragon Tattoo (2011) and most of that was due to the craft that Fincher put into that film. Writer-director Bart Freundlich isn't known for employing craft into a unique style as Fincher is, so this film was mostly going to rise or fall based on the performances of the actors involved.

Michelle Williams (Venom and The Greatest Showman) stars as Isabel Anderson, a woman who manages an orphanage in India. She has clearly lived there for a long time, if not many years. She's totally acclimated to the place, embracing their culture. She's in love with the children who live at the orphanage. One of whom named Jay seems like he's her surrogate son. She also seems to be in a relationship with an Indian man, though we never learn his name. Her orphanage is in need of supplies and resources. In order to get those resources, she has to petition wealthy donors for money. One such donor in New York City wants to meet her. Isabel doesn't want to leave, but the donor insists that she fly to NYC and meet in person. 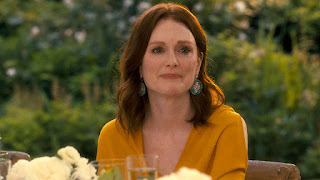 Julianne Moore (Kingsman: The Golden Circle and The Hunger Games: Mockingjay - Part 1) also stars as Theresa Young, the aforementioned wealthy donor. She owns a large company, which does media placement, whatever that means. She has a really nice office in Manhattan and she seems to be on the phone a lot making deals. She's on the verge of selling her company, but, before she does, she wants to donate money to Isabel's charity. However, when Isabel arrives, Theresa puts things off and invites Isabel to a wedding that Theresa is hosting at her house. Theresa's daughter named Grace is getting married to a young man that works for Theresa. Isabel is hesitant, but Theresa is insistent that Isabel attends the wedding.

When Isabel gets to the wedding, she realizes that Theresa's husband is Oscar Carlson, played by Billy Crudup (Alien: Covenant and Watchmen). Isabel and Oscar used to be a couple. In fact, the two of them had a baby together, but they gave that baby up for adoption. The twist is that the baby they gave up for adoption is Grace, played by Abby Quinn (Little Women and Landline). Isabel never knew that Oscar rescinded the adoption and took custody of their daughter. She thought both would go on without their baby. This of course raises a lot of questions about why Oscar did what he did and what everyone is going to do going forward. There are a few more twists, but things ultimately come down to whether or not Isabel is going to stay in Manhattan to be closer to her daughter or if she's going to return to India.

The deck becomes stacked against India and it seems like Isabel has to stay in Manhattan. Thanks to Williams' performance, we get the feeling that she'd rather be in India, but where the film fails is that it relies too much on her performance. Freundlich really should have done more to anchor us in Isabel's life in India. Again, we have no clue how long Isabel was in India. We have no clue what her relationship is with that Indian man. We don't even learn his name. We don't even know if she has friends there or any other connections. We presume that she's lonely, except for her bond to one little boy, but we don't even get Jay's backstory and how he came to be at the orphanage and what he truly feels about her. The original film didn't really flesh out life in India either, but here the film feels more hollow by not doing so.

That supposedly doesn't matter because the real meat of this movie are in the scenes between Williams and Moore. Both women were in Wonderstruck (2017), but I don't believe they had any scenes together. Here, they get to go toe-to-toe in a way. One hopes for something really electric to explode off screen or be like fire and burn through the cinema, but that doesn't really happen. Williams is intriguing in the role, but again the writing and direction don't help things much with her. Moore recently did another remake of an international film earlier this year called Gloria Bell (2019), so here it feels like old hat from her. She's a good actress, no question, but there were some choices here that didn't endear me to her.