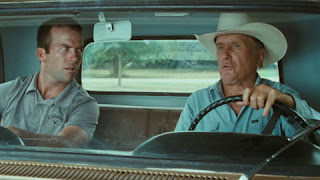 Lucas Black (Friday Night Lights) stars as Luke Chisolm, an up-and-coming, professional golf player. Like most movies about sports, this movie is not really about sports. At least, this movie by the end claims not to be about sports. Except, this is the first sports film I've seen in years that unless you're a sports fanatic, especially a golf lover, I doubt you'll derive much appreciation for this film.

Based on the book by David L. Cook, the story follows Chisolm after he chokes in a golfing tournament, while under supreme pressure from his demanding father who appears to be his manager and coach all rolled into one. Chisolm apparently hops in his car and starts driving with perhaps no real destination in mind. He's out on the desolate roads of Texas when he comes to a fork. He decides to go in the direction leading to a town called Utopia.

It's there he meets Johnny Crawford, played by Oscar-winner Robert Duvall. Crawford is an old-timer, a horse-riding, fly-fishing, plane-piloting, inn-managing, former PGA player who randomly decides to train Chisolm in order to better his game, so that Chisolm doesn't choke next time. Crawford uses unlikely things like painting to help Chisolm with his golf swing.

Crawford uses tactics that don't make Chisolm stronger or more coordinated. He uses tactics to change Chisolm's mindset. Crawford wants Chisolm to know that there's more to life than winning a golf tournament and that his worth isn't and shouldn't be measured by how well he swing a club or whether a tiny, white ball goes into a hole.

These lessons are well and good, but it builds to a problem. Crawford gets Chisolm into the Valero Texas Open, an important, state golfing tournament. First-time director Matt Russell takes us through the whole game and then at the end he doesn't show us if Chisolm wins or not. He merely shows us a freeze frame of Chisolm a few feet away with the golf ball half-way between him and the hole.

The final line, which is in voice-over narration from Duvall, wants the audience to believe that knowing if Chisolm wins or not doesn't matter. His argument even suggests that the game itself doesn't matter. If that's the case, then why bother showing us the whole game? Why end on the game? Why not end with Chisolm going back to Utopia?

The ending, as it stands, makes me feel like nothing I watched even mattered. It made me feel like I wasted an hour and a half of my life. The whole thing would almost be a wash, if it weren't populated with so many great actors. One wonders though what they saw in this project, except for Lucas Black who actually played golf in real-life competitively.

Aside from one, the writers really didn't give the actors anywhere to go. Chisolm stays in Utopia for the titular seven days where he meets an interesting cast of characters. Those characters are introduced as your usual southerners, hospitable and quaint, and with lovely southern accents, but that's really all with which you're left.

Deborah Ann Woll (True Blood) who plays Sarah, a shy waitress and supposed horse whisperer is set up to be a possible love interest. She has a father who died of cancer and her meeting Chisolm might pose an opportunity for her to do something, anything. Yet, the filmmakers tease that opportunity but never take it. Her character just ends up wasted. What was the point of even having her there?

Brian Geraghty (The Hurt Locker) plays Jake, a rival-turned-friend. Geraghty's brief but impactful role is probably the best of the supporting characters. It was fun and funny to see him puff his chest over things, especially golf, which is not perceived as an overly masculine sport.

Unfortunately, Oscar-winner Melissa Leo (The Fighter) is also wasted here. She's practically forgettable. So is Jerry Ferrara (Entourage) who is given the shortest shrift. His cameo consisted of one shot where he says nothing and which lasts only a second or two.

Lucas Black, however, was put on the Hollywood radar with his role as a young teen in Sling Blade (1996). He then showed great growth with his role in Friday Night Lights (2004). He's not part of the usual, young Hollywood crowd, but, with his abilities and presence, he's certainly prime to be a leading man, if that's what he wants, but this movie hardly helps that.

Comparatively speaking, Seven Days in Utopia was like watching a blank screen when propped against other sports movies. There was nothing cinematic about it, little to no real dramatic tension, and I struggle to think what the director here even did. He didn't add much.

Two Stars out of Five.
Rated G for all audiences.
Running Time: 1 hr. and 39 mins.