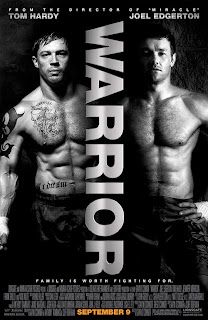 Mixed martial arts is the form of fighting used here, which to the lay person looks like anything goes. You put two animals in a cage and watch them go at it. From what's portrayed in this film, it's not as if these men are learning judo or aikido, or training in those kinds of martial arts. During the bouts, some of the guys might embrace those techniques, but, generally, it seems like rougher and more aggressive boxing.

If seeing that kind of aggressive, uber-testosterone sport where two men get into a ring and hurt each other, and I mean really hurt each other, for money, then this is the movie for you. The theater in which I saw this film didn't have a lot of people, but those people delighted and in fact cheered at this violent sport of almost no rules, whereas I didn't.

It's not that I haven't seen movies about "warriors" in various forms and liked them. There are several boxing films, which I think are well done. It's just that this one treads on themes and issues, which have been done before and done better, that I was rather bored by it. People in my theater were excited, but I was bored even by the brutality.

It might have helped if the brutality wasn't so predictable. Aside from the final fight, all the other bouts have predictable ends. Australian actor Joel Edgerton (King Arthur and Kinky Boots) stars as Brendan Conlon. British actor Tom Hardy (Bronson and Inception) also stars as Tommy Conlon. The two are brothers from Pennsylvania. Both have histories of violence. Both are sinewy. Tommy was a wrestler and a soldier in the army. Brendan was a UFC prizewinner.

If you've seen the trailer for this film, then you know the two brothers will end up fighting each other. This is the fight, the only one that's not predictable. It's the only thrilling one, the only fight with any kind of dramatic weight. Yet, the filmmakers save it for the end and draw it out to frustrating results.

The filmmakers want to make this movie about the schism between these two brothers and how this MMA fight brings them together. Except, next to the fight itself at the end, the two brothers have only one scene together where they get to talk. It's a great scene as they confront each other on the Atlantic City beach, but it's not enough.

I also don't think the character of Tommy is well written. His anger at his brother seems misplaced and manufactured. Given the situation that both have in their past, Tommy's anger at Brendan feels contrived. There's also some stuff with Tommy's status as a soldier in the Middle East, but all of that is left unresolved.

As far as the character of Brendan. He's a former fighter that is considering fighting again because he's in financial trouble, yet his wife doesn't want that because she fears for his physical well-being. The TV series Lights Out on FX earlier this year dealt with this exact same premise. Even though most people didn't watch that show, this movie stands as an echo of it, a weaker reverberation.

The third act of this film is a series of fights, but the editing of it takes away all sense of time. I couldn't tell if all the bouts were occurring in one weekend or one week. While the performances were good, including a heartbreaking moment from Nick Nolte who plays the father, there were no real standouts.