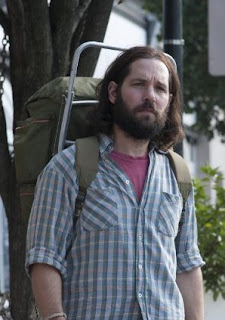 Paul Rudd may be this generation's Tom Hanks. I feel like Our Idiot Brother is a role that Tom Hanks would have taken twenty or thirty years ago when he was in his height as an actor. Rudd plays Ned Rockland who can best be described as a modern-day hippie. He has long hair, a thick beard. He's an organic farmer, and he's all about peace and love.

Ned isn't really an idiot. He's a sweet, charming and loveable guy. No, he's not the smartest, but he's not the dumbest either. The problem is he's too open, too trusting and too honest a person, and, in a world where those things are problems, then you know that there is something truly wrong with the world, specifically Ned's world, which consists of his three, neurotic sisters. The movie consists of Ned becoming homeless and having to bounce from one sister's couch to the next. One sister instead lets him sleep in the bunk bed of his nephew.

As Ned goes from one sister's house to the next, he intrudes upon their lives and makes things difficult for them. He's not doing anything wrong. He merely exposes the secrets and the lies held within his sisters' relationships with their significant others.

Elizabeth Banks who co-starred with Rudd in 2001's Wet Hot American Summer plays Ned's sister, Miranda, a magazine writer trying to get the goods on an infamous heiress named Lady Arabella who has a sex tape and a lot more secrets to spill.

Emily Mortimer (Match Point and Lovely & Amazing) plays Liz, the fun girl-turned housewife whose husband Dylan, played by Steve Coogan, is a documentarian and possible philanderer. She's the first to take in Ned after he's kicked out of his home. She's the most accepting and caring and nurturing, probably because she's a mother.

Zooey Deschanel (All the Real Girls and 500 Days of Summer) plays Natalie, the youngest of Ned's sisters and a lesbian. Natalie's girlfriend is Cindy, played by Rashida Jones (I Love You, Man and The Social Network). Cindy is a lawyer. Jones is such a beautiful woman, but that aspect of her character is played down, indicated by the fact that Cindy wears these big, awkward glasses, something of which perhaps Cindy grows tired or bored.

Adam Scott who co-stars with Jones on NBC's Parks and Recreation brings his usual style of humor as Miranda's boyfriend or maybe friend that just happens to be a boy, named Jeremy. Hugh Dancy and Shirley Knight round out the cast that I have to admit is given some great material here. Wife and husband writers Evgenia Peretz and David Schisgall have crafted a great script that is funny in a natural way. It doesn't feel so contrived as most Hollywood comedies are.

Evgenia's brother Jesse Peretz directs this movie, and a lot of the humor comes out of the fact that Ned is this long-haired, bearded, fun and peace-loving, naive beatnik who is dropped into Manhattan high society. It's not necessarily as deep as movies that deal with true clash of cultures, but it is at times dealing with a clash of values. Somewhere along the way, Ned got off the train that his sisters were aboard and decided to walk in a different direction, a direction of selflessness, lack of ambition and an easygoing compassion and kindness.

He is by no means perfect. He is a bit of blabbermouth and often has no filter. He can be a bit of a pushover and can be very credulous. Again, he's not stupid, but it's this credulity that often gets him into trouble, even arrested. It's this credulity with which the filmmakers play and create various scenes where that does land Ned into bad situations, bad for him but hilarious for the audience.

Five Stars out of Five.
Rated R for sexual content, nudity, and for language.
Running Time: 1 hr. and 30 mins.