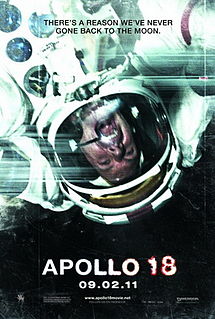 The trailer before this film was advertising Paranormal Activity 3, which was appropriate because essentially Apollo 18 is Paranormal Activity but on the moon. Writers Brian Miller and Cory Goodman take ideas that have been played in other, outer space horror films and boils them down to a more simplified form. Spanish director Gonzalo López-Gallego still manages to create a creepy, claustrophobic nightmare that is like taking the worst fears of Ron Howard's Apollo 13, realizing them and then mixing in a bit of Ridley Scott's Alien for good measure.

The two of them along with a third astronaut were by the end killed, and their deaths were explained as accidents, but, after culling 84 hours of uploaded footage to a website, this movie tells the terrifying tale of what really happened to those three men and it was more than just an accident. Yet, you must suspend disbelief if you want to go with the impossible monsters that are ostensibly the cause of the untimely deaths of these three men.

It's the same problem with the monsters in Pitch Black (2000), except the monsters of Apollo 18 are worse. It might have been nice if the monsters or alien life-forms conformed to any known rules about life-forms, but they don't. The moon has no atmosphere and little to no water, so it would be impossible for life as we know it to exist there. Let alone these monsters! Even extremophiles would not be able to exist for long on the moon. Therefore, we must supremely suspend disbelief to accept the premise here.