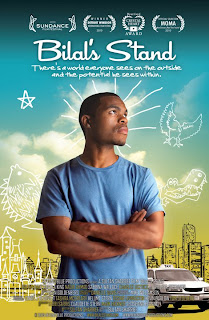 I recently talked to a documentarian who took his queue from a news reporter that believed every person has a story, presumably one worthy of being put to film or video. The documentarian noted that the trick is telling that person's story in a way that's compelling to an audience, especially a wide audience, and, while I would agree that every person has a story, every person's story isn't always exciting or interesting. A filmmaker has to do what he can to jazz it up, which is what the filmmaker of Bilal's Stand tries to do.

What should be noted is that practically everything that happens in Bilal's Stand is true, or, at least, the characters are based on real people. In one case, a person plays himself. For writer-director Sultan Sharrief, this movie is actually autobiographical. The character of Bilal is a substitute for Sharrief. What Bilal experiences is what Sharrief experienced in his real life.

Bilal is a young, African-American Muslim who is about to graduate from high school in Detroit. Aside from his studies, he also works for his family's taxi company called Black-and-White Cab Stand. The head of the family or its moral compass is Uncle Malik who sees that the majority of his family and indeed most of the young black folk around him act immaturely and with no regard to the Muslim faith or traditions.

The only exception is Bilal. He's a good boy. He's a good student and a good Muslim. His only problem is that the demands of his family are such that he is pressured to continuing working for the taxi company in lieu of going away to a college like the University of Michigan. A turn of events and a supportive teacher give him the hope that maybe he could go to college, but he gets resistance from his family and so-called friends.

The resistance comes from a sense of selfishness on their part. It also comes from a sense of desperation and ignorance. The people who give Bilal resistance seem to know no better, even when some should. Bilal does spend a lot of time explaining what life around him is like. He explains life in the ghetto and often time it's life filled with characters whose aims aren't to better themselves but perpetuate the selfishness, the desperation and the ignorance that's keeping them there.

We see Bilal praying in a fashion befitting Muslims, but his Muslim religion barely plays a part here. What sets this movie apart from the rest is that the whole thing hinges on an ice-sculpting competition. Of all the things that you'd never suspect a teenage, black Muslim to be doing, it would have to be ice-sculpting. Yet, Bilal develops an interest in ice-sculpting. It's odd.

Three Stars out of Five.
Not Rated But Recommended Ages 13 and Up.
Running Time: 1 hr. and 25 mins.