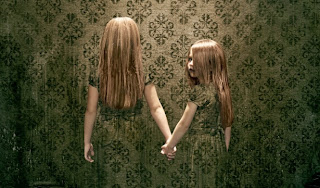 Every few months, various news outlets, magazines and web sites will publish a list of upcoming movies with a rundown of the talent behind it as well as a brief synopsis. When I saw last year's list preview Dream House, I didn't bother reading the synopsis because the fact that Daniel Craig, Naomi Watts and Rachel Weisz were the featured actors was enough to sell me on it. All three of them are phenomenal actors. It's just a shame that their abilities are wasted in a middling thriller.

What's sad is the writer of this movie, David Loucka, probably knows that he'll never pen anything better than Shutter Island, A Beautiful Mind or Ghost, so he decided to come up with a plot that basically combines all three premises into one or merely lines them up back-to-back. I suppose that my saying this is a spoiler. Yet, director Jim Sheridan lays everything out so plainly as to convey not a single ounce of mystery that I dare say anything can truly be spoiled. If anything, the end begs for some confusion but not much else.

My only question is why. Why make this movie? Sheridan is a six-time Oscar nominee. There is no way he looked at this project and saw something worthy of his talents. This was nothing but a cash grab. For the actors though, I don't get why they would sign up for this.

One Star out of Five.
Rated PG-13 for violence, terror, some sexuality and language.
Running Time: 1 hr. and 32 mins.