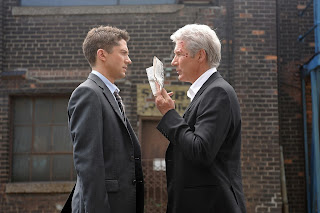 When it comes to spy movies, most have become acquainted with the James Bond variety or the Jason Bourne kind. This past Oscar season, audiences were introduced to Tinker Tailor Soldier Spy, a spy movie that's not as action-packed but more thoughtful and realistic. Michael Brandt's The Double is a happy medium between the two.

Richard Gere stars as Paul Shepherdson, a former CIA agent who was tracking a Russian terrorist group known as the Cassius 7. This group was seven men, including the leader named Cassius. All of those men got captured or killed, mostly killed. The only exception was Cassius himself who eluded the authorities for decades. He was presumed dead after a while.

Tom Highland, played by Martin Sheen, brings Paul out of retirement upon getting information that Cassius is not only alive but that he's in the United States and killing again. Paul is reluctant to come out of retirement because he doesn't believe Cassius is back, but he meets Ben Geary, played by Topher Grace (That 70s Show).

Ben is a FBI agent who has been studying the Cassius 7. Ben is a Harvard graduate who wrote a thesis paper about the Cassius 7. Ben also idol-worships Paul as being the only person ever to get close to Cassius. Ben is able to convince Paul that Cassius is back due to the fact that Ben knows so much about Cassius and his moves.

Paul and Ben end up working together. Ben becomes more of a sidekick, but one of their first stops is to see Brutus, played by Stephen Moyer (True Blood). Brutus was one of the Cassius 7. Brutus is not only a name that references the story of Julius Caesar but also he has knowledge of Cassius. If you recall the story of Julius Caesar, both Brutus and Cassius were Caesar's assassins. Here, both Brutus and Cassius are modern, Soviet assassins.

Brutus is not as good an assassin as Cassius though. Cassius has a distinct method of offing his targets. Cassius cuts the necks of his victims using a wire to slice them in an upward motion. Ben finds several people murdered in this fashion and gets hot on Cassius's trail. Unfortunately, this also makes him a target of Cassius, which worries Ben's wife, Natalie.

The relationship between Ben and Paul is reminiscent of the relationship between the characters played by Ryan Phillippe and Chris Cooper in the film Breach (2007). The screenplay here by Michael Brandt and Derek Haas is built on a lot of dramatic irony. Richard Gere handles it all very well though. Brandt and Gere keep things thrilling till the end where many cool surprises lie.

Five Stars out of Five.
Rated PG-13 for action, violence, some disturbing images and language.
Running Time: 1 hr. and 38 mins.