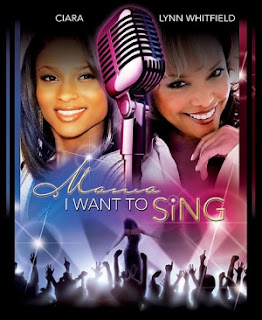 There have been many young African-American female singers who start by singing in church and then who transitioned into pop stars and had their music or their pop persona conflict with their church upbringing. Mama, I Want to Sing!, written and directed by Charles Randolph-Wright and based on the play by Vy Higginsen and Ken Wydro, attempts to depict this, but other things rise up to eclipse it.

One thing that does rise up. One thing that sticks out like a sore thumb is Billy Zane, who people will be able to see again on the big screen in Titantic 3D. In a cast that is predominantly black, he is the only white guy. Zane plays Dylan, the head of a record label who takes a young black church singer and transforms her into a R&B/pop star named Amara. To use a bad pun, Zane is a bit zany. He's not as zany as he's been in other films. He's only zany by comparison.

Real-life R&B/pop star Ciara plays Amara. After losing her preacher of a father, she decides to pursue her passion of singing as well as stardom. This is to the objections of her mother, Dr. Reverend Lillian Winter, played by Lynn Whitfield. Winter is a televangelist who is a bit of a diva. She manipulates and is very controlling. Someone who doesn't have an agenda is Amara's brother Lucas, played by Kevin Phillips (Pride and Red Tails). Lucas is a photographer who is the intermediary between Amara and her mother.

Amara and her mother argue and they argue frequently. Both make good points, but neither seem to see the other's view or how a lot of their actions are similar. The performances of Ciara and Whitfield are good, especially Whitfield at the end when she has to deliver a very powerful sermon as Reverend Winter. But, there is never ever any humor between Winter and Amara. The playwright and filmmaker do find some comedy in Winter's situation, but, when Dylan appears, his brief humor is side-splitting funny against the void that exists between Winter and Amara.

Dylan is almost like Simon Cowell, or a comical, American take of Cowell. Beyond Billy Zane, there are other interesting supporting actors here like Hill Harper and Ben Vereen, but I was more compelled with what Zane was doing. The movie takes a detour into dealing with the Iraq war, but, again, I would have rather detoured more with Zane's character. It's odd, but I'd recommend the movie, if only to see Zane.