'Lost Everything' But Found So Much More

Two years ago, I wrote a review for Easier With Practice. I posted a link to that review on Twitter to which I got a response from that movie's DVD distributor, Breaking Glass Pictures. The distributor has since sent me press releases and screeners. Last fall, one screener I received was Lost Everything, a crime drama set in beautiful, south Florida.

When I posted a review to that film, I got another inside response. This time, it was from the writer and producer of the movie, Jerry Hamilton Bell (@JerryHBell). I asked him for an interview and he arranged one with himself and the film's director, Kim St. Leon, over the phone last month.

I noted the tactile nature and St. Leon said the film does have a graininess to it. Some lovers of digital video might consider it distracting, but St. Leon said there is a texture and depth to the look of 16mm, which I feel in today's context is representative of a kind of roughness or grittiness.

Bell told me that he wrote the first draft of this movie's screenplay in the 1990s. He was a city planner who was taking acting classes. St. Leon read the 300-page script back then and helped Bell refine it over the years. In that time, the way movies are photographed have changed, leaning more toward a refined look, a more sterile one.

While the essential story in the script is more indicative of the time in which it was written, that of the 1990s, St. Leon determined the shooting style should be selfsame. She filmed over the course of three weeks during the summer 2007 in and near the city of Miami.

Miami is of course a gorgeous town. St. Leon said that there's no getting around its brightness. Yet, there's an undercurrent to any city and she wanted to show that, to show that contrast, that underbelly and those darker aspects. St. Leon only has two or three scenes that occur at night, so conveying those darker aspects was the challenge, but the roughness and grittiness of that 16mm look helps to get at that.

It was one of a few tricks that Bell and St. Leon had at their disposal. They didn't have a large budget, so they had to work with what they could, and what they could was a lot of goodwill from the south Florida community. The pair said they had to call in a lot of favors in order to get the film made. Bell and St. Leon wanted to go the Hollywood route for this, their first feature film together, but, when accomplishing that proved more difficult or more laughable than once thought, Richard Wolff, the co-founder of Breaking Glass Pictures, advised they take a simpler path. The two of them did, and while some might fret over everything lost, or everything they could have had, by going down that path, Bell and St. Leon consider everything they found, which in many ways was so much more.

I ascertained two reasons the filmmakers were adamant about keeping the multiple couples. One reason is that Bell is a fan and really admires Robert Altman. Being familiar with Altman's style and the types of films he made, it's easy to guess why maintaining the multiple couples would be vital. The other reason goes to a scene I asked St. Leon to explain.

In my review, I noted a sex scene that cross-cut between a gay couple and a straight couple. I asked St. Leon if that scene was scripted or if it was something created in editing. She said that it was always her intention to cross-cut between the two couples with lots of close-ups, so that the viewer would eventually not know who was doing what to whom. She wanted viewers to be excited but not know by what and understand that it doesn't matter whether it was gay sex or straight sex. It's just about humans coming together.

The filmmakers said that they didn't set out to make a gay movie, but Bell did say that this film was inspired by the work of Michelangelo Signorile. There was a lot of homophobia in Hollywood when Bell wrote this script. Yes, there have been improvements. Many actors are now out without having been outed, but some would argue that institutionalized homophobia in Hollywood remains an issue. This movie tangentially attempts to deal with that.

Bell and St. Leon didn't lose the multiple couples. Bell also didn't lose the Quentin Tarantino vibe that pervades this movie, which included a Reservoir Dogs-style ending. The film concludes with bullets and blood, which St. Leon confirmed was always how it did conclude. Yet, some things were lost from the original inception.

Bell's original idea was 300 pages long. The average movie script is about 100, so obviously a lot had to be lost. The filmmakers would argue the integrity of the project was never lost, but St. Leon did tell me about how something significant was changed but what was found in its stead turned out to be even better. 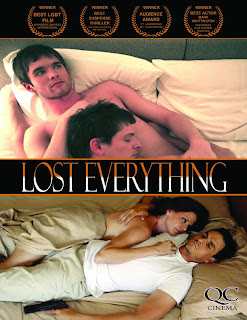 To give you the bare bones of the plot, the thrust of this film noir revolves around a Hollywood star named Brian Brecht who comes to Florida to shoot his next big project. In order to protect him from an unrelenting tabloid reporter, Brian's overbearing, mother-like agent unleashes a mob enforcer whose form of protection causes more havoc and chaos than what was bargained.

Bell had originally envisioned a male actor playing the role of the enforcer. St. Leon ultimately decided to change that character and lose Bell's idea and make the enforcer a female. Through casting, the two found an amazing African-American actress and singer named Avery Sommers. Yes, Bell lost his original idea, but he found instead what is arguably the best character of the movie.

When I asked Bell what the most difficult part was of making this independent movie, he said, "taking a step back." Bell isn't the director. As the writer and producer, he's very much involved and hands on, but there comes a point where he had to yield to the director. Going with Avery Sommers would be a case in point, but Bell clearly trusted St. Leon who began her career as a casting agent.

St. Leon went on to become one of the top theater directors in south Florida. In fact, many of the actors came out of that theater community. The actor who plays Brian Brecht is Mark Whittington who had worked in theater for a long time. He gives a great performance here. As opposed to Sommers who St. Leon said about her performance had strength in her stillness and her eyes, St. Leon said of Whittington that he rocked the line of confused, complicated and "being a dick."

Yet, recognizing that, recognizing good performances like that of Sommers and Whittington, is something that might not be what Bell would easily spot, so he knew there would be times where he would have to step back, as he said, and let others do what they do best and trust in that.

St. Leon told me that this project was such a collaborative piece. It couldn't have been done without the efforts of many. She mentioned the humidity, the 100-degree weather and the long hours, but she confirmed the fun of working with all of the cast and crew and using what each brought. She said, "The best part is the shared vision."

I'm sure Bell would absolutely agree with that, but, as the writer, as the man who originated all of this, there probably was some lingering, proprietary feelings. Bell was perhaps anxious. He said he didn't know how the movie would turn out, so taking a step back was a bit daunting.

But, listening to both Bell and St. Leon who talked to me over the phone at the same time, I could tell there was a simpatico, a good friendship. They talked about the process, which they shared and which spanned almost two decades, having so many laughs along the way. I shared with them the laughs I had while watching their film. Like with a Tarantino movie, despite the violence and serious subject matter, there is humor to be had.

It's not the same sense of humor as Tarantino or the same degree. It's its own and it's at times unexpected, as both Bell and St. Leon discovered during film festival screenings. That in and of itself may be the beauty of filmmaking. The beauty may be in discovering things that even you didn't see, even when you're the one crafting it.