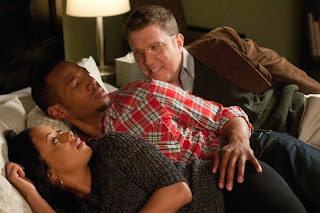 On the surface, this film is a spoof of Paranormal Activity (2007), co-written by Marlon Wayans, done in the same vein as the Wayans' Scary Movie (2000). Oddly enough, I don't feel that this movie is as over-the-top, even though there are jokes and gags that are practically the same. This movie is extremely more toned down. This is most likely because Wayans' performance isn't as over-the-top as in Scary Movie. Arguably, Marlon Wayans is playing a character closer to who he really is, much like he did in his TV series The Wayans Bros. (1995).

If Marlon Wayans is more playing himself, then that presents this movie as an interesting case study. Throughout his career, Marlon Wayans has done almost all of his comedic projects with his brothers. His eldest brother Keenan Ivory Wayans gave him his first job on television In Living Color. He co-starred and co-wrote multiple works with his closer brother Shawn Wayans. This movie is really his first comedy wherein Marlon is the only Wayans involved behind the scenes.

Throughout those various projects, specifically those with his brother Shawn, Marlon Wayans has always had a running gag working against him. In The Wayans Bros. series, for example, Marlon was always considered less sexually attractive and quite ugly compared to Shawn. The irony was that when he wanted to be, Marlon could be very sexually attractive

When Marlon Wayans was cast in the action film G.I. Joe: Rise of Cobra (2009), he more than likely bulked up and made sure to add some muscle. Whatever he's done, the now 41-year-old looks damn good, and to prove it, he's practically to totally nude in several scenes in this movie.

Yes, at the end of the day, Marlon Wayans is a comedian and his tactic of choice is toilet humor and inappropriate language. Yes, the goal is to get audiences to laugh at the supernatural pratfalls and various things that emerge from the human body, mainly from its rear end. Yes, all of that is at the forefront, but to me, Marlon Wayans is really exploring something else than the crude comedy mined from spoofing other films.

It's rare to see a black man on the silver screen as a sexual being to be desired. It's almost non-existent. Television has done a better job even in the past 5 years of depicting black sexuality, but still it's not totally representative. Yes, there is the ridiculous, supernatural gags that he throws at the audience, but what Marlon Wayans does in this film is rarely done and that's showing a beautiful, African-American couple having sex.

Marlon Wayans stars as Malcolm Johnson, a man who shoots and produces videos. Essence Atkins co-stars as Kisha, his girlfriend, who is at the point where she's moving into the house with Malcolm. The movie in many ways is about the same things that a lot of male comedians would make with this premise. Yet, there is a predilection for Marlon to make this movie strictly about sex in every scene and at every turn.

It's a good thing because Marlon Wayans has never been objectified sexually and for him to be so in this movie is proof that he can be because he is a good-looking guy. His brothers have always stood in his way. It's a bad thing though because, as a black man, American culture needs to look at black men for more than just their bodies.

From slavery to sports, black men have only been good for their bodies, never for their minds, intelligence or creativity. Having another example isn't beneficial. However, the depiction of black sexuality is such a rarity. What's funny is despite Marlon Wayans being the object of sexual desire, he also does as much as he can to turn the audience off or gross them out. At one moment, it's interesting to see his nude derriere, all soapy and wet, and in another moment one has to turn away as that same derriere is used to defecate.

He does have four characters lusting after him, including a gay man. He has two of those characters specifically singling out black men as sexual objects. The Mandingo party perfectly proves this and seems designed to do nothing else but show naked black male booty.

The only other film this year that came close was Baggage Claim. That movie had one scene of actual black sexuality, but it was only that one scene. Baggage Claim was more about the romance, the stuff that leads to sex but not the actual sex itself. Prior to Baggage Claim, the last film to touch or merely brush past black sexuality was Think Like a Man (2012) with Tyler Perry's Good Deeds being the one before that. Neither of them truly depicted black men as true objects of desire. As odd as it sounds, A Haunted House does.

Three Stars out of Five.
Rated R for crude and sexual content, language and some drug use.
Running Time: 1 hr. and 26 mins.