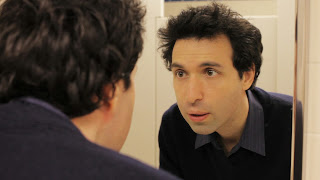 Early 2013 saw the release of a handful of films starring Alex Karpovsky. A couple of them were written and directed by him. Of the three notable, Red Flag is the best. It's a film that plays to what might be Karpovsky's strength, which is comedy. Karpovsky had a brief scene in Sleepwalk With Me and Gayby and he was funny in both, so to me he's much better invoking laughs than anything else besides naturalistic drama.

Much like Sleepwalk With Me, Karpovsky is playing a version of himself, perhaps Curb Your Enthusiasm-style. Filmmaker Alex Karpovsky plays filmmaker Alex Karpovsky, the director of a movie called Woodpecker, which has a series of screenings throughout the southern United States. Prior to leaving to attend those screenings and do a tour that includes Q & A sessions and DVD signings, Alex breaks up with his girlfriend Rachel, played by Caroline White.

Despite Alex's seeming depression, Karpovsky crafts a series of gags and awkward moments that kept me giggling and laughing. The supporting cast that he brings on board sets up and delivers those laughs almost spectacularly. It begins with Dustin Guy Defa who plays Clay, Alex's gay brother-in-law. Clay gives him weird, if not great advice about replacing swear words. It continues with Jennifer Prediger who plays River, a young woman who gives new meaning to the word clingy. The crown jewel is Onur Tukel who plays Henry, Alex's good friend.

Henry is probably the last on Alex's call list, but Henry is the only one to join Alex on his movie tour, despite having called like a million people before him. Henry is writing and illustrating a children's book, but the publisher wants him to change a lot of things about it, including the ending, which has a child die.

There are a lot of great jokes here, including a gut-busting four-way fight. Alex separates from his girlfriend after four years. The remainder of the movie is Alex trying to make a connection and often failing if not constantly failing. The connections that he does make come at the most unlikely of times. The final shot, which is great, is proof of that, and watching Karpovsky stumble his way through is entertaining and enlightening.