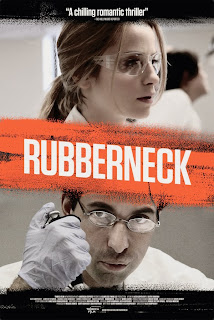 Early 2013 saw the release of a handful of films starring Alex Karpovsky. A couple of them were written and directed by him. Of the three notable, Rubberneck is his dark drama, a semi-thriller. Karpovsky plays Paul Harris, a scientist working at a Boston laboratory who hooks up with a fellow scientist at a party named Danielle, played by Jaime Ray Newman. Paul thinks a relationship might come of it, but Danielle sees it as a one-nite-stand and only as that. Yet, Paul who suffers from panic attacks becomes obsessed with Danielle and even becomes jealous when she starts to see a married teacher named Chris, played by Dennis Staroselsky, who begins working at the lab.

Karpovsky seems to be doing something a bit more ambitious than Red Flag, which is a simpler comedy he directed. He's got a camera crew on a fishing boat and helicopter shots. He also pushes himself more as an actor, as Paul's relationship with Danielle ultimately reveal his abandonment issues with regard to his parents, which are deeply rooted.

What's interesting is that the basic premise of this movie takes a plot point in Red Flag but reverses the sexes. Karpovsky is the one on the wrong side of unrequited love but who takes it to psychotic extremes. It's not quite Fatal Attraction. It's seemingly more realistic.

Three Stars out of Five.
Not Rated but recommended for mature audiences.
Running Time: 1 hr. and 24 mins.