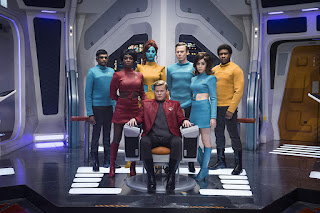 On July 12, the nominations for the 70th Primetime Emmy Awards were announced. Black Mirror received eight nominations. Seven of those nominations were for an episode in its current, fourth season called "USS Callister." Last year, the show was only nominated in three categories, but it won two, including Outstanding Writing for a Limited Series and Outstanding Television Movie. The likelihood seems high that this show will win in some of its categories this year, and Charlie Brooker, the creator of the series, will probably win again for Outstanding Writing, if nothing else.

On its face, "USS Callister" looks like a parody of Star Trek (1966) and in many ways it is. It could almost read as a satire as well but what Brooker is going after is a level of misogyny and cruelty that was never present in the original Star Trek. Instead, Brooker is critiquing video game culture. There is of course plenty to critique there, but Brooker is honing on the misogyny and cruelty, exposed in the recent Gamergate controversy.

There are several issues at play here. Some of which we've seen unfold in Star Trek and not just the original but also in the spin-off series. Those issues have also played out in other science-fiction properties that have grappled with virtual reality and artificial intelligence. However, the basic structure of "USS Callister" is essentially the same as that of a famous episode of The Twilight Zone, specifically the 1961 episode in the third season titled "It's a Good Life." 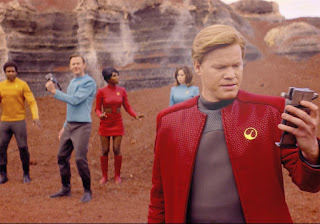 In that episode, a 6-year-old boy with god-like powers holds siege over all the adults around him. In "USS Callister," Emmy-nominee Jesse Plemons (Breaking Bad and Friday Night Lights) plays Robert Daly. Plemons is in his late twenties, almost thirty, but his character is very much just as childish and emotionally stunted as the boy in The Twilight Zone episode. This may be Brooker's view of the video-game players he's critiquing. His view may be that they're childish whether they're 20 or 30. The question is if that's okay, given that their childishness is limited to a fantasy realm inside a computer and doesn't affect anyone.

However, with the Internet and the ability to be connected online to other people, video games or what one does in video games can affect anyone else. This movie deals with that aspect in a way that is a bit roundabout. Brooker throws in the appropriation of other people's DNA. If not for that aspect, the essential problem would be moot. Except, maybe it isn't moot. Brooker somehow feels the need to try to make artificial intelligence more human by physically linking it to humans. He can't let the artificial intelligence stand on its own, which makes this whole situation feel rather contrived.

In 1988, Star Trek: The Next Generation had an episode called "Elementary, Dear Data" and in 1989, it did an episode called "The Measure of a Man." In both those episodes, the show tackled the issue of sentience to things with artificial intelligence like holographic projections or androids. These things didn't have any trace of biology to them. They were mechanical through-and-through. Of course, there have been tons of movies and TV shows about robots who seem human and how dealing with them proves or disproves our definition of humanity. From Metropolis (1927) to Blade Runner (1982) to HBO's Westworld (2016), we've seen it done over and over. I get Brooker's instinct to add a new element or wrinkle to distinguish his work from the litany of other A.I. or robot stories, but his wrinkle of adding DNA to online robots only makes the affront that much more obvious in it being wrong. The series' title should be a clue, but the hope should be that everything isn't so black-and-white. 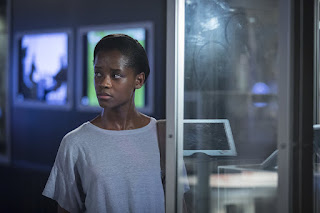 Nevertheless, there is another episode of the fourth season of Black Mirror that got nominated for the 70th Primetime Emmy Awards. That episode was "Black Museum." It only got one nomination and that one nomination was for Outstanding Supporting Actress where Letitia Wright was the one spotlighted. Wright gives a great performance but the fact that she was in the three, biggest movies of the year, Black Panther, Avengers: Infinity War and Ready Player One obviously gave her an edge up.

Wright co-stars as Nish, a girl who stops at a gas station along a desert road, presumably in Utah. Next to the gas station is an establishment akin to Ripley's Believe It or Not. It's called the Black Museum. It's run by Rolo Haynes, played by Douglas Hodge. Rolo proceeds to explain to Nish about the items in his museum. All the items involve transferring someone else's mind or experiences into someone or something else. The use of the Burt Bacharach and Hal David song "Always Something There to Remind Me" was well done in underlining that premise.

Rolo explains three of his items on display. With each explanation comes a flashback of the people involved. The first delves us into the life of a doctor who is given a device that allows him to diagnose patients better but it turns him into an extreme sadomasochistic junkie. Rolo tells the story of this doctor and apparently Brooker adapted it from an unpublished piece by Penn Jillette called Pain Addict. 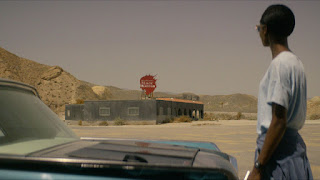 The doctor's story is in-line with the overall themes of what Brooker is doing, but so are the stories in many of the other episodes. The doctor's story here though feels tangential to what's happening in the grand scheme of "Black Museum." It ultimately is just another example of how technology will only bring out the worst in people and lead to their ruination, which is a stance from Brooker with which I've never agreed. Brooker is such a pessimist about technology or maybe it's just a pessimism about mankind in general. However, his ending to "Black Museum" is meant to be a rousing exclamation of justice or retribution. Yet, that justice comes in the form of the same sadomasochism that was villainized earlier. (Spoiler alert!) The ending is also very similar to the ending of "USS Callister" in that the so-called bad guy becomes trapped in the device of his own making, a device used to torture others. I suppose in that way, it makes sense why these two episodes got the Emmy nods.